No Lam Ching-Ying? No problem! That appears to be the motto for this one, in which our favourite unibrowed Taoist priest is notable by his absence: the Chinese title translates as Uncle Vampire, perhaps hinting at a familial stand-in. Instead, we get a clash of theologies, in the forms of Buddhist monk Master Yat-yau (Wu) and a priest (Chan) called simply “Four-eyed Taoist” in the IMDb, presumably due to his glasses. They don’t like each other very much, so it’s kinda odd that they’ve ended up living next to each other in the middle of a forest, along with their respective disciples, JingJing (Lee) and Kar-lok (Chin). Moderate shenanigans initially ensue, such as Four-eyes using magic to make Yat-yau his puppet. The duelling breakfast is quite amusing. 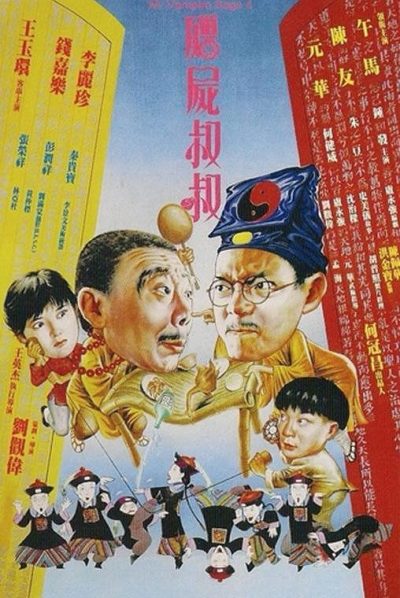 Things ramp up considerably on the arrival of a funeral procession, accompanied by a pal of Four-eyes. He’s the guard for a young prince and his flamingly effeminate adviser, and informs Four-eyes the coffin contains a vampire. A convenient storm washes the coffin clean of the magical talismans keeping the creature inside, and before long our two priests are besieged by a small army of undead, under the control of the big bad – not the least of which is one flamingly effeminate vampire. Our two rivals are going to have to combine their forces and their talents, if they and their acolytes are going to make it through the night.

This was the first in the series I ever saw, back at the good ol’ Scala cinema, and it has largely stood the test of time. I certainly didn’t miss Lam as much as I thought I might. It perhaps makes a difference that the Taoist priest here, Four-eyes, is a bit of a dick. He’s clearly the instigator for much of the feud and also treats Kar-lok rather cruelly. This wouldn’t really fit the more kindly persona put forward by Lam in his portrayals [not that he suffers fools gladly for his apprentices, but is at least fair with them], so a different actor works well. Wu is considerably more sympathetic, but it’s interesting to see the two religions put aside their spiritual differences and come together to face a common enemy. There is clearly more than one way to skin a vampire.

The genres aren’t blended quite as successfully here: the first half is mostly comedy, albeit occasionally quite physical, while the second is considerably more skewed toward action and horror (though I did laugh at Four-eyes giving Yat-yau a “fun-sized” sword, while keeping the industrially-dimensioned weapon for himself). I was definitely more impressed the further this went on: the gay jokes in particular haven’t aged well, though I’m not sure the old “kissing under the guise of artificial respiration” gag was ever all that funny, even in 1988. But once the top blows off the coffin, the film hits its stride, with everyone getting to share the spotlight. There’s hardly chance to pause for breath the rest of the way, until the final (somewhat abrupt) freeze-frame finish.