I may be going out on a limb here, but I suspect this is probably the world’s only pro-life hopping vampire horror film. For it opens with the following prologue, which I copied, exactly as is, from the subtitles: “Some people think that unborn baby does not possess a spirit. Therefore, many women committed crime by abortion and stillbirth. This makes a lot of fragile spirits lose the chance of transmigration. These spirits we called Holy Baby. If a Holy Baby failed to be reborn after several attempts, it would become enemy of man. It will become evil.” So we have Master Kau (Lam), who has a shrine filled with these spirits, which he and his henchmen, Man-Choi (Hui) and Chau-Sang (Chin), keep in check. Well, mostly. 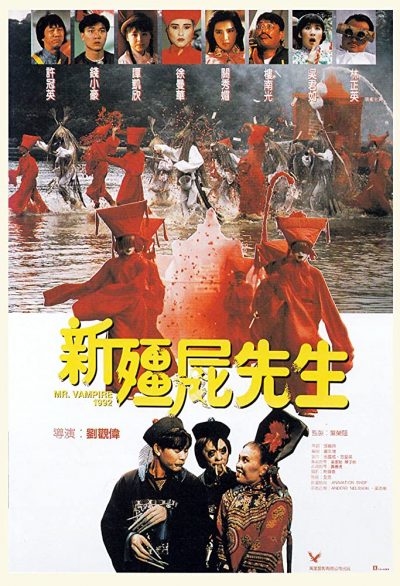 For one of these Holy Babies escapes, possessing the maid to the pregnant Mai Kei-lin, intent on then taking over her unborn child. Fortunately, Kau is in the area, because her husband, a general in the army, is being turned into a vampire by his late father – a result of dad’s coffin touching the ground, don’t you know. To fix the general, Kau needs vampire tooth powder, so Man-Choi and Chau-Sang are sent to get that. However, once that’s obtained, they then have to deal, not only with the Holy Baby but the vampires, who have followed the minions back to the general’s house. If your movie bingo card for this one also contains: lion dancing, copious small child urination, and an exploding sorceress, give yourself two points.

Much like Mr Vampire II, the early going here is tough, with attempts at comedy which fall completely flat. We’re talking “extended diarrhoea brought on by dodgy sushi” bad. [That is actually one topic of the humour, but it makes for a decent comparison as well] The presence of Ng, the queen of Hong Kong comic mugging, playing another spiritualist, Kwan-yue, should give you a clue where this aims. Though I’ll confess I did laugh at the human lazy Susan in the middle of the table, consisting of three slowly rotating soldiers, holding trays. Otherwise, it’s so entirely unfunny, I completely refused to tick the ‘comedy’ category box for this.

If you stick with it, however, it also follows the template of II, in that it does recover. There is a genuinely spooky sequence where Kwan-yue is attacked on the road by a spectral procession: like so much else here, don’t expect any explanation. Things also build to a grand finale which provides non-stop mayhem, as vampires, spiritualists and Holy Baby-possessed maids rampage and brawl round the general’s large, well-appointed house. Is it enough to negate the woefully bad stabs at comedy we say in the opening 30 minutes? Not entirely. But considering what grade this was heading towards at that point, reaching the dizzy heights of a C+ counts as a remarkable recovery. It’s testament to how good this whole franchise could be, when it set its mind in the right direction.