Despite the alternate title, and the presence of the same actor playing a Taoist priest, this is not officially part of the Mr. Vampire franchise. It was made by a different production company, and without the input of Ricky Lau. However, it’s little if any less pleasant, and brings much the same melting pot of genres to the dining table. It’s certainly a great deal more successful in adapting the idea for the modern world than Mr Vampire 2. This plays a bit like a Hong Kong version of Dead Heat, with re-animated corpses being turned to criminal ends. The approach here is considerably less scientific though, with a Japanese sorceress (Nishiwaki) using black magic to bring the dead back to live for use in her drug-trafficking ring. When one of her couriers is caught in a police stakeout, only being stopped when hit by a truck, and is discovered actually to have died a week previously, it’s clear this is outside standard cop expertise. 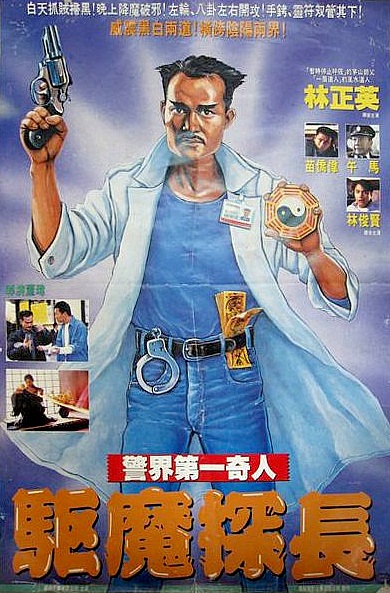 Enter Uncle Feng (Lam C-Y), a cop with a reputation for handling weird cases like this. He’s brought in to head office, and stays with a pair of more traditional cops; Detective Lam (W. Lam), who looks down on the “old-fashioned” ways of Feng, and one referred to in the IMDb as “Sergeant No. 2237” (Miu). Hey, at least he gets a name: the villainess is simply “The Sorceress”. Giving your characters a name: it’s clearly vastly over-rated. The first half is, it must be said, a little underwhelming, with not very funny comedic aspects such as Feng trying to protect his attractive young relation from the old-school sexist predation of Det. Lam, or adapting to sharing living space with the two younger officers. [The decor of their apartment features a gigantic Union Jack painted on one wall: I’m not sure if this was intended as some kind of oblique political statement]

Fortunately, the movie shifts gear after the opening third toward the expected areas of horror and action. This starts with a trip to a health club where the veteran’s value is shown, Lam using traditional magic to follow a subject remotely. This brings them to the Sorceress’s lair, though she’s soon alerted to their presence, setting up a magical duel between her, inside, and Uncle Feng outside the building. [I’m just hoping the Sorceress’s white cat was a well-trained stunt feline, because it did not seem happy at some of the treatment it received…] There is another fun sequence in a morgue; this features Feng breathing genuine fire, not exactly something you’ll see many Hollywood stars do. Then it’s back to the lair for round two and a grandstand finale, exactly the kind of thing that made me fall in love with Hong Kong genre cinema to begin with. What the film may lack in budget – some of the optical effects have not aged well! – it certainly makes up for imagination.