While in hindsight, del Toro was an obvious choice. at the time he still seemed considerably more arthouse than commercial. His only English-language film had been Mimic, which failed to cover its budget at the box-office. However, its style caught the eye of New Line, and Del Toro was offered the director’s chair in the sequel after the previous incumbent declined to return. This was a poor decision by Stephen Norrington: he went on to make The League of Extraordinary Gentlemen, an experience so horrific, Norrington vowed never to direct again. del Toro, meanwhile, created what is, for me, the best movie with which either Marvel or DC have been involved, as well as one of the best vampire films ever.

What stands out is that he 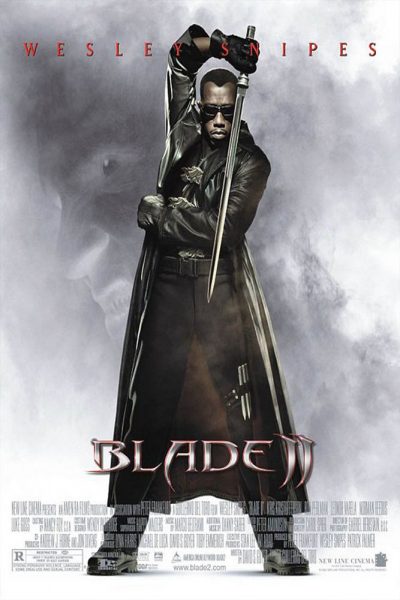 took what worked about the first film, and enhanced it – in a way, similar to how James Cameron upped the ante for his sequel to Alien. For example, if facing one vampire is bad, then facing a multiplying army of them must be far worse. Indeed, there are some sequences, such as when Blade and the Bloodpack are exploring the nightclub, which are very reminiscent of Aliens: you just know the shit is going to hit the fan; it’s a question of when. The various characters in the Bloodpack have a cocky, Marine-like swagger to them too, even if not quite reaching the iconic level of Hudson, Hicks and Vasquez. [Donnie Yen’s presence is felt more in the martial arts, which he helped choreograph, and are improved all round]

The chief monster (Goss) is every bit as inventively horrific as anything from the mind of H.R. Giger, with its face which splits open at the chin to reveal fangs and barbed tentacles. This mutant vamp clearly put all its ability points into the “Jesus, what the fuck is that?” skill. Yet, it turns out to have a surprising humanity beneath its ugly exterior. This is not uncommon in Del Toro’s work, most obviously The Shape of Water; though fortunately, no-one gets to have sex with the monster here. Arguably, the true villain is Eli Damaskinos (Thomas Kretschmann), the head vampire. Unlike the slick, suit-wearing elders of the first film, Damaskinos has much more in common with a classic Nosferatu-type.

In terms of people whose presence here now seems particularly out of place, the prize has to go to Reedus, playing Blade’s geek, an archetypal nerd who eats Krispy Kreme donuts and watches The Powerpuff Girls. Despite battling similarly post-mortem opponents, it’s hard to imagine a character further from from The Walking Dead‘s Darryl. [Reedus’s first movie role was for Del Toro, in Mimic] Yet he’s still a fine part of the ensemble, with Ron Perlman also worthy of note. He, too, had worked with Del Toro before, appearing in the director’s feature debut Cronos in 1993. I kinda wonder why Doug Jones didn’t take Goss’s role.

Although (just) the shortest of the trilogy, it definitely feels as if it has the most invention and imagination crammed into it. This two-hour film feels closer to 80 minutes long, with remarkably little slack and offering a steady stream of memorable moments. I’m not surprised even John Carpenter couldn’t match it.

What we said then: Yes, that Luke Goss, former teen idol as part of Bros, last seen at the Fairfield Halls, Croydon, in a musical version of Plan 9 from Outer Space. He does not break into When Will I Be Famous?, but seeing his name in the credits was probably a bigger shock than anything in the movie (even surpassing Cat from Red Dwarf showing up). Still, this was a very solid effort, complete with some of the most eye-popping gore I’ve seen in quite a while, occasionally reaching The Thing standard. Snipes is back, teaming up with vampires to fight a new menace (Goss), whose mode of attack really needs to be seen to be believed – you’ll certainly look nervously at anyone with a cleft chin on the way out of the cinema.

Kris Kristofferson also returns from the grave…somehow…but Blade still gets a new sidekick (Reedus), who is immensely irritating, despite a fondness for The Powerpuff Girls and Krispy Kreme donuts. While there is some effort to inject plot, for the most part this is really no more than a series of loosely-linked set pieces, with Snipes even more outrageously cool than first time round. The editing is lighting-fast, perhaps too quick, since I’d have liked to admire Donnie Yen’s fight choreography – as in Highlander: Endgame, he’s also a minor character. It’s still slick, fast-paced, spectacular and fun; no more than you’d expect, perhaps, but certainly no less than you could want.