I don’t often watch the Best Picture films chosen by the Academy Awards. The only winner I’ve seen this decade was Argo, and that’s probably a movie future generations will look back at and go, “Wait, that won Best Picture?” But I’ve enjoyed most of Del Toro’s work over the years, from the awesome Blade II (still among the best comic-book movies of all time) through the Hellboy films to Pacific Rim, so figured I should give this a chance. And… meh. It’s exactly the kind of tolerant nonsense the Academy always laps up – but especially now when Hollywood has found itself under scrutiny, for not quite living up to the high-minded ideals it frequently espouses. Events of the past year leave me rather too cynical, I’m afraid, to give this more than a well-photographed passing grade. 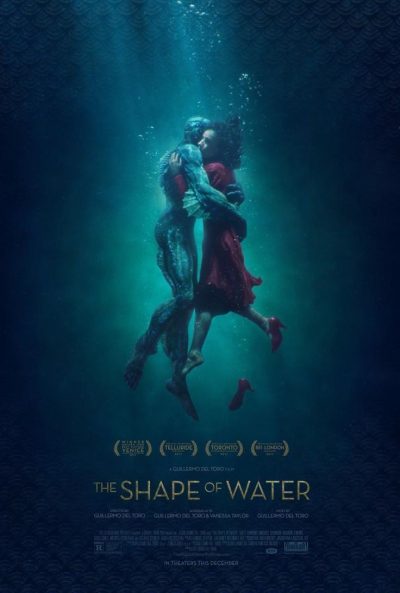 The plot reminded me of comments back when the gay marriage debate was raging in 2000. Local politician J.D. Hayworth said, “I can make the point of absurdity with an absurd point. I guess that would mean if you really had affection for your horse, I guess you could marry your horse.” Absurd? Sure. And that’s basically what we have here. Mute cleaner Elisa Esposito (Hawkins) works at a (remarkably insecure, it has to be said) government facility, into which is brought an Amazonian river-creature (Jones). Basically, he is The Creature From the Black Lagoon, under the cruel control of Colonel Richard Strickland (Shannon). But the manimal bonds with Elisa, and when she learns of the imminent vivisection planned by Strickland, hatches a plan to help Lagoony escape and return to the ocean.

Let me just quote one sentence from the Wikipedia synopsis, which largely sums up my problems here. “Elisa and the creature soon become romantically involved, having sex in her bathroom, which she at one point fills completely with water.” Oh. c’mon… I mean, it’s the last bit which offends, simply from an engineering point of view. I got totally distracted, figuring out the weight of water required. Even a small bathroom, say 10’x10’x7′, would need close to 20 tons. And Elisa does not have a ground-floor apartment. Meanwhile, their relationship is about as convincing as the Greek tales about Zeus banging women while in the shape of a swan, a bull or a shower of gold. Except, in this case, there’s no shape-shifting as an excuse. Which is why I’ll always be calling this one “I can’t believe she fucked the fish.” Okay, technically, amphibian. Turns out, all you need to get into Lagoony’s pants – not that he wears pants – is a couple of hard-boiled eggs and some jazz records. Who knew?

The social commentary present is too obvious and heavy-handed as well. Look! News footage of civil rights protestors being attacked by cops! Using this footage seems about the only reason the film is set in the early sixties, but is still less awkward than the scene where Elisa’s gay neighbour (Jenkins) makes a rejected pass at a diner employee. I could go on. Elisa lives above a cinema. She gazes lovingly at a pair of ruby slippers in a shop window. Enough, already, we get it: lonely outsiders need love too. This is a topic explored, even in the fantasy genre, much more subtly by Tim Burton in Edward Scissorhands, not least perhaps, because he didn’t feel the need to shoehorn Russian spies in to its narrative.

I did enjoy the performances, though wonder if mute actresses get pissed off when such roles go to actresses with a voice. Is there a term for this, y’know, like “whitewashing”? [Probably: seems there’s a term for just about every other slight, real or perceived] And in terms of establishing the atmosphere, and the creature, Del Toro and his team hit it out of the park. You’ll believe a man can breathe underwater, and credit is particularly due to Jones for getting emotion past the industrial volumes of latex under which he is buried. The influences and nods to previous films are copious, and these are meshed in well enough. But I was never convinced by the relationship at the core of the film, and if this really was the best picture of the year, Hollywood’s problems are larger than Harvey Weinstein.