Or Deadpool 0, as it should perhaps be called. For Hannibal King is – perhaps unwittingly on Reynolds’s part – much the same acidic, foul-mouthed exponent of hyperviolence we’d come to know and love. The similarities were not lost on some people. According to the actor, a Fox executive gave him a stack of Deadpool comics on set, and told Ryan, “Seeing as you’re essentially playing this guy anyway, maybe you should play him for real.” Twelve years later, Reynolds did, to enormous commercial and critical success – though those two movies leave this looking like something between an audition tape and a slightly underwhelming imitation. 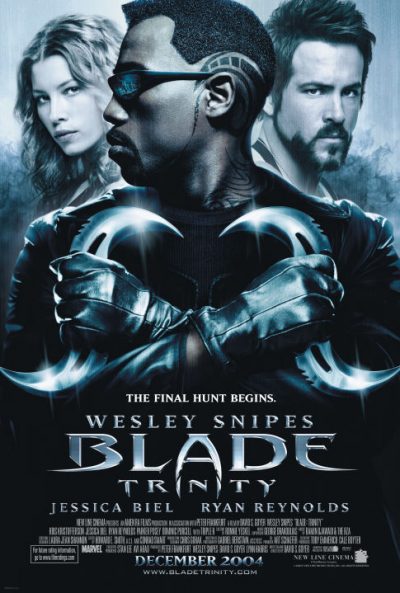 It does certainly bear the closest similarities to the team-up films which would eventually become the cornerstone of the Marvel Cinematic Universe. I’m not certain this works for Blade, who has never felt like the most sociable of guys. In the second film, while there was a collaboration, it was strictly one of necessity, with no love lost on either side. That felt more appropriate: here, Blade seems like the guy who really does not want to be at the office Christmas party. Admittedly, he owes his colleagues a debt. For after Blade is exposed by a sting operation, he’s captured by the FBI and is just about to be handed over to the vampires when King and Abigail Whistler (Biel) break him out of custody.

Meanwhile, their enemies, under Danica Talos (Posey) have awakened the Big Bad: Vampire Zero, as it were, the father of their entire species. Drake (Dominic Purcell) has powers that dwarf all other vampires, and Talos wants to use them to make the rest of her race invincible. Drake’s blood, however, is all the Nightstalkers need to complete work on Daystar, a bioweapon that will wipe out vampires entirely. Oh, yeah, and there’s a whole subplot about vampires farming humans in this giant warehouse for their blood. It never goes anywhere of note, which is something of a shame: the same is true for the reaper pomeranian, an experimental animal whose potential is sadly under-realized.

Perhaps they were victims of a thoroughly troubled shoot. Snipes was unhappy with the studio’s original choice of director, no more satisfied with Goyer, and only came out of his trailer to do close-ups, according to Patton Oswalt, who plays one of the Nightstalkers. This would explain why Blade seems particularly dead-pan, even by the high standards of taciturn-ness set in the previous two movies. Reynolds does much of both the dramatic and comedic lifting here, and certainly steps up to the plate. King likely peaks when he calls Talos a “cock-juggling thundercunt,” the kind of phrase I feel should become part of everyday speech.

The results are still a good deal of fun, though if it wasn’t for Reynolds’s snark, it easily to see how it could all have gone totally south. Having pitched its hero against Dracula – something Buffy managed to avoid until the fifth season – you’ve more or less reached the top of the vampire-hunting mountain. It’s perhaps no bad thing the franchise went into its coffin for a bit of a nap, rather than churning out a series of likely devalued sequels [again: let’s not mention the TV series, m’kay?] But James Wan apparently pitched a reboot of the franchise a few years back. Maybe Aquaman and Blade have a team-up in their future, hunting underwater vampires.

What we said then: Evidence that in cinema, execution is almost as important as inspiration, the final (for now – box-office pending, no doubt) installment of the trilogy does the lamest thing possible in a vampire film. It resurrects Dracula (Dominic Purcell). Oh, please…even Buffy didn’t succumb to that cliche until season five, and did it with appropriate tongue-in-cheek. Here, it’s played totally straight, which signifies a lack of imagination that’s unfortunate, especially compared to its immediate predecessor, and the only scene with any invention is the “blood farm”, an angle that is almost immediately discarded. This is a nasty surprise, given that Goyer worked on the script for the first two films; you’d think he’d have come up with something equally imaginative for his debut as a director. One sequence, involving a Pomeranian dog, shows the direction they perhaps could have taken.

Fortunately, the execution is rousing enough to prevent this ending up like Van Helsing, mostly thanks to the addition of the quirky Reynolds as an endearingly irritating sidekick. I think I was finally won over, when he called Parker Posey’s vampire queen a “cock-juggling thundercunt”. Or maybe I misheard. 😉 Purcell, as Dracula, is an utter non-entity, and you wonder why they bothered casting him at all, as he brings nothing to the party. Snipes, of course, is Blade, and his portrayal remains among the coolest comic-book characters ever brought to the screen, while Biel and Posey add appropriate sneer (though the former’s iPod use is among the most painfully obvious product-placement of the year). The action, while lacking the flair Donnie Yen helped bring to part 2, is competently-handled and frequent enough you should never be bored. Given its origins in the pulpiest of pulp fictions, this isn’t so terrible – just something of a disappointment.