While they never quite die entirely, it feels as if vampire movies go through about a ten-year cycle of popularity. If so, we’re due for another burst, with the last surge having been around 2007-08. That was focused on the mopey teenage romance of Twiglet, but also gave us Let the Right One In and 30 Days of Night. Blade formed part of the previous lap, along with John Carpenter’s Vampires, which came out two months later in 1998. Though Vampires had considerably less success: below 30% of Blade’s box-office take, despite a similar, R-rated approach.

In an era where it seems there’s a new Marvel film out every other weekend [seriously: less than four months this year will cover Captain Marvel, Avengers: Endgame and Spider-Man: Far From Home], it’s amazing to think that Blade was their first American theatrical release for twelve years. Since Howard the Duck in 1986, Captain America and The Punisher had gone straight to video, while 1994’s The Fantastic Four went entirely unreleased. With its hero very much a minor property, this was a cautious dip of the toe by Marvel back into cinema. While the $45 million budget was not small, inflation-adjusted it was about $9 million less than Howard. Money considerably more well-spent, however. 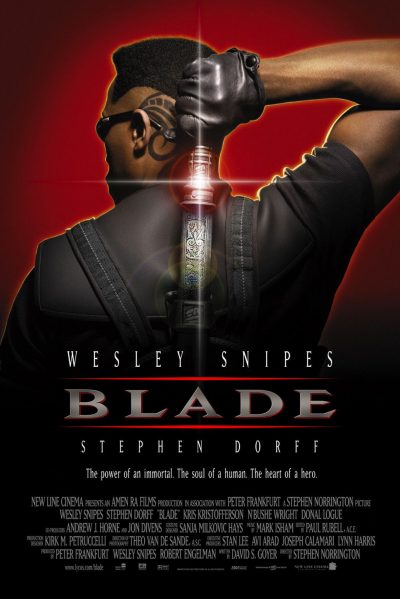 For this is a great deal better, mostly due to a script which does a fine job of giving us the back story of Blade (Snipes) and developing his character, while pushing forward his battle against upwardly-mobile vamp Deacon Frost (Dorff). Frost wants to summon the vampire’s blood god, La Magra, and obtain its powers. In an interesting if under-explored angle. he’s seen as yuppie scum by the elders, because he was “turned” into a vampire rather than being born one. [Delightful to see one of the elders played by Udo Kier, returning again to the field he occupied in Blood for Dracula]. Meanwhile, Blade is helped by grizzled veteran Whistler (Kristofferson) and hematologist Dr. Karen Jenson (Wright), who comes up with a vaccine, as well as EDTA, a compound which makes vamps explode real good.

Most of this has dated quite well, save for the occasional bit of ropey CGI. Snipes embodies his character from the very first time we see him, posing in the vampire club. It’s clear he’s a bad motherfucker – though speaking of which, there seemed to be rather more Oedipal overtones than I remembered. The biggest weakness here is probably Jenson. She serves so little point, I wonder if her character was originally added a romantic interest, only for that angle to be eliminated. The finale could also have used quite a bit of tightening: Frost’s summoning ritual seems to go on for a good chunk of the 120-minute running time, when all we want to see is Blade kick ass.

And that he eventually does, with sharp aplomb, and shades so solidly locked on his head, they must be nail-gunned to his temples. One can only wonder how much more bottom might have been beaten, had Jet Li agreed to play Frost, rather than do Lethal Weapon 4. Still, Snipes inhabits the role, to such an extent that it’s impossible to imagine anyone else in the part. I’m not sure you can say the same about, for example, any member of the Avengers. While the spectacle of Marvel movies may have increased in scope since, I’m not sure they have produced a more stylish lead character.

What we said at the time: Blade features some of the most impressive, intense and, well, crunchiest violence I’ve seen at the cinema for a very long time. Snipes is fine as the hero, Dorff makes an impressive villain (despite a startling resemblance to Kiefer Sutherland) and even Kris Kristofferson, Blade’s sidekick is good enough. Plus you’ve got Kier and Lords in minor roles.

So why doesn’t it work? Could it be because the script is half-written dreck? One presumes it’s all explained a great deal better in the comic books, because it certainly ain’t here. It’s the usual apocalyptic and millenial nonsense, with Dorff attempting to summon the spirit of some vampire god or other because…well, just because, alright? N’Bushe Wright [what kind of a name is that? N’Bushe?] also fails miserably as love-interest-cum-haematologist. I’d use the word “anaemic” except that would be unforgivably painful.

There’s certainly a lot of stuff here to enjoy, but you’ll probably find yourself reaching for the fast-forward to find the next session of excessive and gratuitous violence. Which may be a problem if you’re in the cinema…