This straightforward British actioner stars Bennett, best known as WWE’s Wade ‘Bad News’ Barrett, in the role of former soldier John Gold. He’s on the hunt for the people, also ex-Army, who killed his best friend while becoming drug lords in the sleepy rural town of Devotion. They include a local heroin addict (Shaffer) and cafe owner (Elia), whom he befriends on his way up the supply chain to the guy at the top, Hatcher (Daniels).

Sadly, it’s not as much fun as it sounds. First and foremost, it needs significantly more action, and less wandering around town. The fights never reach quite the level you’d expect, thanks largely to an odd cinematic style in which it looks like frames are removed. I’m presuming this is an attempt to add impact: it’s more distraction than enhancement, and I don’t recall the same issue with Boyask’s previous work, such as Warrioress. Bennett and Daniels clearly both know their stuff and are legit hard: Daniels was a professional kickboxer, and Bennett a bare-knuckle boxer. So Boyask should just [/Ken Watanabe] let them fight. The crappy digital muzzle flashes aren’t helping, either. 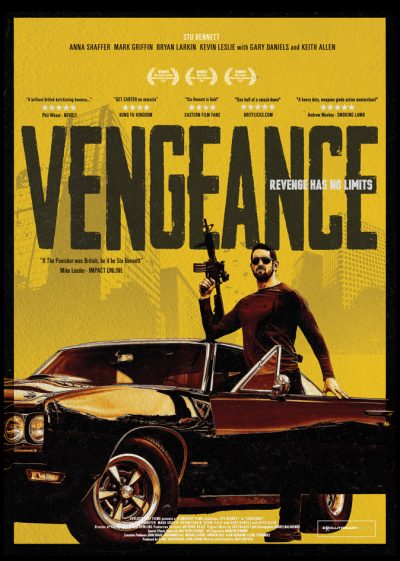 That said, Bennett does have presence, though the script can’t decide whether he is a taciturn blunt instrument of few words who kicks arse, or a wisecracking smart-ass who kicks arse. It’s mostly the former – his method of investigation involves going to the local pub and announcing his purpose to all and sundry – yet he occasionally comes out with florid lines such as “I’m going to decorate this place in the delicate shade of your skull and brains.” The latter is a better fit for Shaffer’s character who, bizarrely, reminded me as much of Dianne from Shaun of the Dead as anything. Not exactly your typical junkie, shall we say.

Going the Hot Fuzz route of affectionate parody, and playing up the British elements, might have been the best way to go with this, considering it feels like a throwback to an earlier, more straightforward era. [C’mon, you could at least have given us the hero’s trademark wrestling line, when confronting Hatcher at the end: “I’m afraid I have some bad news…”] There are elements which occasionally suggest this is the intention, e.g. Greenhaus’s electronic score is a glorious eight-bit pastiche of Tangerine Dream. I’m just not certain that was an intentional goal however, and the overall tone appears to be more serious than the subject matter deserves.

It just about passes muster in terms of Friday night post-beer entertainment, despite the ratio of jaw-jaw to war-war being on the low side. Just do not expect anything new or inventive here: contrast Warrioress, which gave us the 4’8″ Cecily Fay creating the mayhem, something considerably more memorable than another large land-mammal like Bennett. He has got some work in front of him if he wants his movie career to become Rock-like – or even Dave Bautista-like. Still, everyone has to work their way up, I guess.