Initially, this seems like this is going to be just another riff on Day of the Dead, with the military and scientists co-habiting uneasily in a bunker, around which the zombie apocalypse has raged. Ok, not technically zombies here, since the disease here is more like a virulent form of rabies, which has found a home in almost all of the world’s population. To all intents and purposes, that’s a trivial distinction, since everything else is as you’d expect. Therefore, among the few survivors are researcher Dr. Gina Rose (Dormer); soldier Colonel Knox (Standen) and – this is where the twist comes – Morgan (Smith), who survived his contagion and as a result can communicate with the infected. 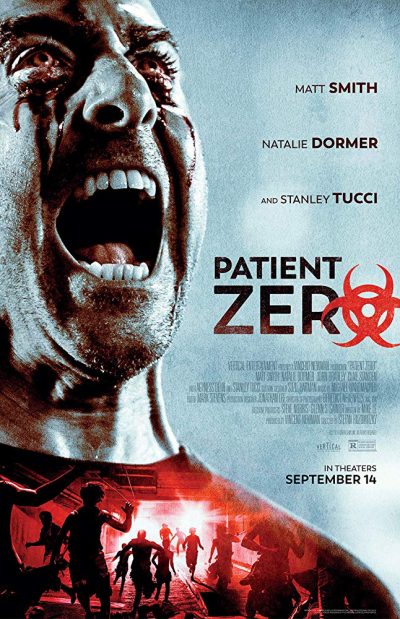 They’re searching for the source of the outbreak, which Rose believes is the key to coming up with a virus. However, it also appears the infected are evolving: one such is the Professor (Tucci), who infiltrates the facility in order to meet Morgan, who is their patient zero, and whose existence poses a threat to them. Meanwhile, Morgan’s infected wife is kept in the basement, along with the other test subjects, so he pops down occasionally for heartfelt chats and the occasional flashback sequence. Because, we apparently need to know that he used to run a record-shop ‘n’ so on.

This is a mix of the annoying and the effective (more of the former than the latter, if the truth be told). Matt Smith’s American accent certainly falls into the former category: if you want an American, why hire Doctor Who? He’s not the only one. John Bradley has a supporting role – like Dormer, he’s another Thrones alumni, and it’s equally disconcerting to hear a Yankee version of Samwell Tarly. At the other end, there is a genuine sense of claustrophobic intensity, with the survivors living virtually on top of each other. And Tucci nails it, coming across as a contagious version of Hannibal Lecter, combining charm, intelligence and threat in similar quantities.

More generally, the infected have their moments too. For example, their being sensitive to sound – and Morgan blasting music at them as a form of extreme rendition, to get information from them – is an innovative touch. Though given this, you’d think that when they eventually attack (as the infected inevitably do), someone would just crank up a boom-box.  The weakest part, however, is probably the ending, which comes just when the story feels like it could finally be getting somewhere. It’s such a nothing-burger, the entire film suddenly resembles the pilot for a television series. And given it took three years from being shot to its release – or escape, considering the originally planned theatrical release was shelved – it’s not likely to be a series we will ever see.

It also suffers from some extremely obvious foreshadowing: when Morgan and Gina engage in what must rank among cinema’s least sex scenes, I immediately could tell where that was going to go. To be honest, that’s likely true for the film as a whole. Its unceremonious dumping straight to video is a decision with which it’s hard to argue.