You have to try really hard to get an IMDB score as low as 2.0, so I was quite impressed when I saw that this locally-produced movie had managed to achieve such a ranking. For a yardstick, the straight-to-video hell that was Scarlet Fry’s Junkfood Horrorfest comes in there at a 3.3 – glowing praise in comparison. Could it possibly be as bad as that? Naturally, I made it my mission to track the movie down and find out. It wasn’t actually hard, since the whole thing is available on YouTube, where the comments are considerably kinder. If not much more plausible, however: I mean, “THIS was the BEST “scary” movie I’ve EVER seen”? Admittedly, the same person admits “I’m not a “scary” movie type.” But I’d say if your count of scary movies reaches… two, this is not likely to top the list.

It begins with the “name” in the cast, Lorenzo Lamas – though oddly, this film is absent from his IMDb filmography. He plays psychiatrist Frank Johnson, owner of a large Scottsdale mansion which is basically the film’s sole location. He’s cheating on his wife, who comes home unexpectedly to catch him canoodling by the pool with his mistress. She takes exception, coming after them with the inevitable Psycho knife and in the resulting struggle, is accidentally stabbed to death. The mistress convinces Frank to dismember the body and burn it in the fire-pit. Inexplicably, Frank goes along, but then decides to get a 2-for-1 special, killing and disposing of the mistress in the same way. 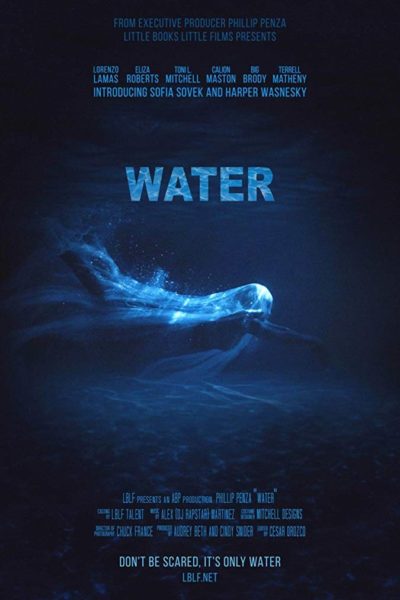 This was the first point at which I was distracted, researching on the Internet whether it was practical to dispose of multiple bodies in a fire pit. I am now likely on several FBI watch-lists as a result of my search-engine activity. To save you joining me, it’s possible but not easy. Crematoria furnaces typically burn around 1,600 F, while a fire pit can potentially reach 2,000 F. It’d take a while though. Frank clearly put in the effort, returning to the pool with a box of ashes, though it seems kinda small for two adults [which should be 6-7 litres of ash. Hey, I’m already on the list, how much worse could it get?] He decides to dispose of them by… pouring them into the pool.

Do you want a haunted water system? Because that’s clearly how you get a haunted water-system. Not immediately, though. The police sniff around the disappearances, but a year later the case is closed and the widow gets a massive insurance payout. Another questionable Frank decision follows: celebrating with his new squeeze in the pool. Unsurprisingly, it ends poorly, with them both being sucked beneath the surface somehow. Regardless of two further apparent disappearances, the house is up for sale in the next scene, with the viewing process apparently involving topless cavorting and further disappearances. Still, the housing market being what it is, the place rapidly ends up bought by the Yates family, consisting of father Greg (Maston), his wife Stephanie (Mitchell) and little adopted daughter Dani.

As parents go, they are something else. with non-swimmer Dani almost drowning as they view the property. Not that this incident puts them off their purchase. Better parents might take it as a sign to – oh, I dunno – put a fence up or something? Just a thought. Maybe they’re distracted by the gardener thrown in to sweeten the deal, a large, rather slow man called Daryl Brown (Brody), who is somehow inherited from Frank. It’s a clunky character, who verbalizes rather than acting, and could easily seem a caricature. As an aside, it feels Penza cast every single African-American actor in Arizona. All six of them, for the state has a lower black percentage in its population than Nebraska. [A stand-up comic friend used to do a bit about being part of a breeding program at Phoenix Zoo. It almost provoked a fight at a show, when a fellow African-American in the audience took offense.]

I really should talk more about Daryl, because I kept expecting him to show relevance to the plot. He has been at the house since the days of Frank, and so presumably would be a helpful source of information. If not for the cops, who seem only vaguely interested, than at least the Yates family. Nope. Never happens. He could be entirely written out of the story without the slightest impact. While I’m at it, I’ll mention Grey Yates’s outrageously British accent. Now, as an expat Brit in Arizona, I know we exist. I just didn’t expect one to show up here, especially quoting Captain Picard: “Tea. Earl Grey. Hot.” I feel triggered. Not least because he turns out to be bisexual, eventually incurring the water’s wrath by cheating on his wife with both sexes. Though initially, it shows its displeasure through… chucking a beach-ball at him. 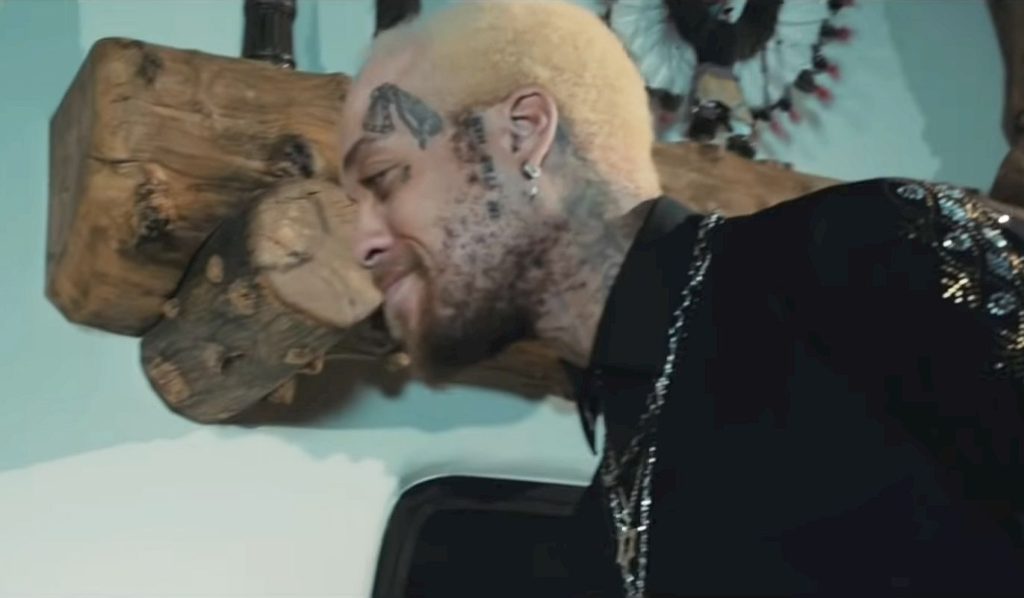 A long time before we get to that, Greg pulls in a priest, Father Matthews (Terrell Matheny) to try and exorcise the house. This was a point where I sat up and took notice, for the priest (above) is thoroughly against type. He’s black (of course), and sports a robe, sandals, dyed blond hair, face tattoos and a genuinely interesting attitude. It feels like he might have wandered in from Hellbenders. However, he’s no match for the possessed water, although it does at least take two attempts before he’s done in. By this point, even the (black) guy who delivers their Chinese food knows the house is a death-trap, virtually throwing the food at them before running away: it’s just the family who go on, oblivious. For a period of several years, apparently, going by the sudden change in the actress playing Dani for an older girl (Sovek), after a long period where the character is simply absent.

She becomes increasingly important in the final half-hour, as she has befriended the pool spirits, which allow her to walk on water. Things escalate from there until she goes full Regan MacNeil, growling “You’re not my mommy! You’re not my mommy!” after catching Daddy with his boyfriend. The water is now inexplicably able to cause car crashes, but also switches tack, teleporting itself into another victim’s car. Things only escalate from there, though not much of what happens the rest of the way could honestly be said to make sense. Naturally, it’s left open for a sequel, and to my surprise, this actually exists. Water 2: The Cleansing, which is also available on YouTube. You know what? Despite the critical kerb-stomping delivered over the previous thousand words, I’m probably going to watch it.

For in most aspects, this isn’t as bad at the IMDb rating implies. Technically, it’s quite sound, with decent camerawork and audio. The performances are a bit variable, but in most cases, get the job done adequately. The real issue here is the script, which feels throughout like it makes things up as it goes along. There’s no internal logic, in terms of what the paranormal activity can do, or consistency in why it acts the way it does. The utter pointlessness of Daryl. Failed attempts at levity. Scenes with no lead-in or consequence, such as the death of Greg’s mistress by in-car drowning or Dani walking on water. Largely as a result of such flaws, the film staggers from one eye-rolling moment to the next, and while I don’t agree in totality with the derision heaped on this, I can see where it’s coming from. Though it is still a genuinely Arizonan film, made largely with local talent, and is laudable, purely as that. Let’s just hope Penza gets someone else to write the sequel.