It has been a long time since I’ve seen a Michael Bay film. I think the last was the original Transformers, which somehow managed to make giant robots fighting each other so boring, I skipped the rest of the franchise. But this? Hoo-boy. The story is weak, and that the characters are known by numbers tells you all you need to know there. However, when it doesn’t bother its pretty little head about those kinds of things, and concentrates on Blowing Shit Up Reel Gud… I have to admit, there’s probably no-one better at it than Bay. 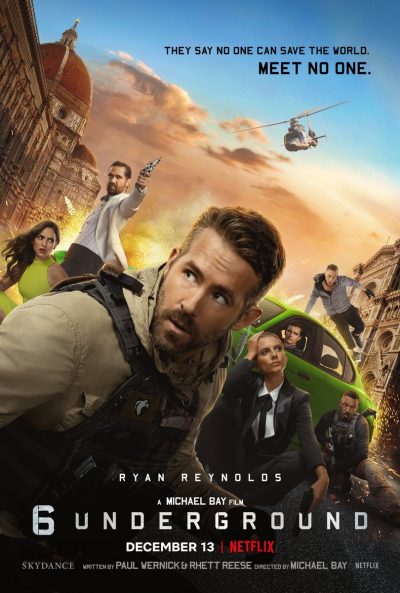 The film gets things going with a jaw-dropping car-chase through Florence which would be an amazing climax for any other movie, and keeps on going. And going. By the time it has finished, your brain will have been pummeled into submission, and you are only ten minutes into this 128-minute cinematic work. The other set pieces are little if any less impressive, throwing multiple disparate elements into Bay’s blender, yet coming up with an end result which delivers the desired sensory overload to an impressive degree. Particular credit goes to the free-running work, done by London’s STORROR group. It’s a master-class in how CGI can, and should, be used to enhance practical stunts, and after the movie, I headed straight over to YouTube to check out STORROR’s channel.

The plot is, as expected, complete pants. A billionaire playboy known as One (Reynolds, in typically snarky form) decides to use his resources for good, and puts together a team, each highly-skilled in their own area, turning them into “ghosts” by faking their deaths. Their mission: to take out the “real bad guys”, untroubled by oversight, political philosophy, etc. Of course, there is a convenient and easily identifiable such bad guy to hand, in the form of corrupt, chemical weapon-using dictator Rovach Alimov (Raz), leader of the fictional state of Turganisovakia, or some such made-up name. He has an equally convenient, nice younger brother who can be inserted in his place. Democracy? It’s vastly over-rated.

And of course, not even replaced subtly, in a bloodless coup. Not when there is a giant yacht which, for reasons I appear to have missed, can turn into the world’s biggest magnet, at the touch of a button on One’s mobile phone. It’s full of this kind of nonsense, which I cannot defend in the slightest. Yet on the other hand, it’s nonsense about which I didn’t care in the slightest either, any more than I cared about characters Two (Laurent) through Seven (Hawkins). This cost about the same as Netflix’s other original movie of the month, The Irishman, and both feature veteran directors, doing what they do best. But I know which one puts its budget most clearly up on the screen, and I also know which one is more likely to come out of the “Watch again” list on the streaming service. Sorry, Martin.