Call me a masochist, but after watching Lumber vs. Jack, I felt like I simply had to see this sequel. I’m not 100% sure why, and it may have been a mistake to do so sober – I’d finished off all our whisky in the previous installment. Let’s just say, Chris has now put her foot down and is refusing to have anything to do with the third entry in this “franchise”, announced at the end: Jack and Jill vs. the Hill. What, was Jack vs. Shit already taken?

As the title suggests, once again, we get hero Jack Woods (Liquori) taking on the evil products of genetic engineering, made by the Genbetter Corporation. Even though its head, Brad Surebanks (Welch) was killed at the end of part one, his company’s research continues, and this time has unleashed a horde of half-human, half-pumpkin monsters on rural North Carolina, just in time for the local pumpkin festival. Genbetter has also developed cloning technology. Which is fortunate for Surebanks’ divorced wife, Tiffany (Parent). Because she needs to get hubby back from the dead so he can change his will to include her, and then get killed off again. 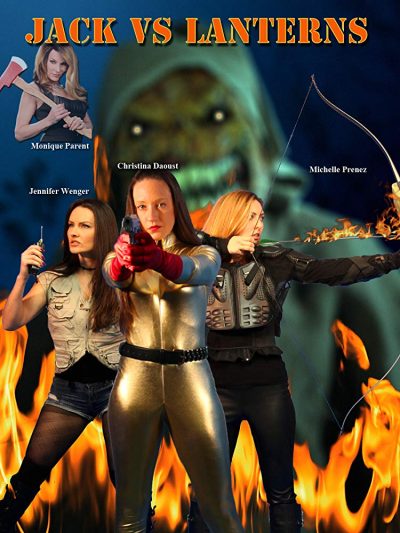 Technically, Liquori does seem to have learned a bit from his previous effort, and this is more polished, although still some way short of slick. The most obvious grating feature is huge quantities of superfluous green-screen work. This is used even when the background is entirely mundane, like a tent. The big plus is Parent, who shows the difference between a professional actress and… everyone else. Actual acting, folks! Her character is also much better integrated into proceedings than Debbie Rochon in Lumber, where it seemed Rochon was taking part in a different movie.

However, at 105 minutes, this is certainly stretched beyond what it should be, even allowing for the very… slow… pace… at which the pumpkin monsters move. The effects still remain staggeringly primitive, with the creatures little more than Halloween store masks, until Jack needs to ax them, at which point you get cutaways to fragments of actual pumpkin flying through the air. The audio still needs work, with chunks of the dialogue muffled or entirely inaudible. Not that it matters much, since we’re hardly talking Shakespearean levels of writing.

Indeed, the film is probably at its best when no-one is talking. The early sequence where a pumpkin monster stalks a woman who mistook it for a porch decoration is surprisingly tense, with its implacable relentlessness working for the scene. Continuing down that line, with an increasing number of threats, rather than the (frankly, idiotic) Brad cloning plot might have been a better idea. Though I’ll admit to a cheap snigger at how the dumbed-down copy of Brad turns into a Doctor Who fan. Indeed, the film depicted in the poster could have been an improvement too. It’s notable by the entire absence of Jack, save for the title, in favour of various action heroines. That one might not even have needed whisky.