Drew is a shape-shifter, capable of taking on the form of anyone he wants, along with absorbing their memories and skills. There is a catch: doing so leaves the target as a desiccated corpse. He has been hopping between bodies for decades, but of late has been experiencing issues, with each new body lasting a briefer time. Medication, in the form of a potent combination of antibiotics and cocaine, help to stave off the accelerating decomposition, yet cannot prevent it. He’s running out of time, not least because he needs to win the heart of his one true love, Julie (Burke) – a situation not helped by the fact that he has to do it in a variety of bodies, of varying genders, ages and attractiveness. 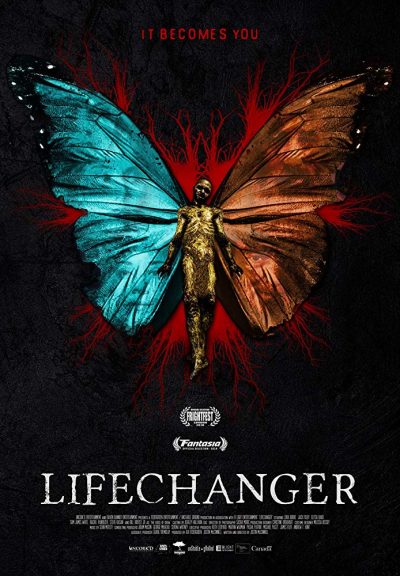 It feels there’s a lot of potential left on the table here, and we’ve joined the story after the most interesting period has already passed. If you could seamlessly replace anyone in the world, who would you choose? That’s a far more interesting question than the ones posed here, where Drew is forced to body-hop out of necessity, with little room for choice. Though I did like the presence of Oberst, narrating proceedings as the internal voice of Drew. This provides a consistency across his multiple forms which helps tie things together. However, there’s a lack of any real conflict here: while there are news reports about a police investigation, we never see one. Contrast, say, The Hidden, which pitted a similar shape-shifter against an alien cop, to far greater effect.

There’s no doubt that Drew is the bad guy: both for his lethal methods, and his relentless stalking of Julie, in a variety of forms. Though in his defense, explaining the truth is not exactly an easy conversation – and as we eventually see, when it’s had, things immediately go just a bit pear-shaped. The problem is the lack of any particular good guy. Or girl: for we don’t learn enough regarding Julie, such as what about her is capable of generating such passionate devotion in him, until too deep into the movie – you might be able to figure it out, before the movie tells you. Until then, she sits in a bar, writing as therapy, and is somewhat attractive. Not sufficient on which to hang a protagonist.

In its combination of body horror and love story, it occupies the same solar system as The Fly, yet doesn’t match up to that in either genre. It’s also supposed to be shoehorning in some kind of commentary about toxic masculinity. This aspect can (and should) safely be ignored. But there are some nicely gooey practical effects, which will help sustain interest, when the plot is less than completely capable of doing so. The frequent shifts of form for Drew also disrupt proceedings, despite the narration. Even before an ending which poses more questions than it answers, it all feels significantly disjointed.