As Christmas approaches, things on the remote New England community of Tucker Island are quickly going from bad to worse. The fish and lobsters which drive the local industry have dried up. The power and Internet are cut off. Then the ferry which is the island’s only link to the mainland, forty miles away, doesn’t show up, and efforts to sail away… do not go well. When badly mutilated bodies start to be found, it’s clear there’s something is – or things are – stalking the inhabitants. It’s up to local doctor Maggie (Robins), visiting writer Titus (Wilkas) and marine biologist Sam (McLaughlin) to figure out, firstly what it is, and secondly, what can be done about it. 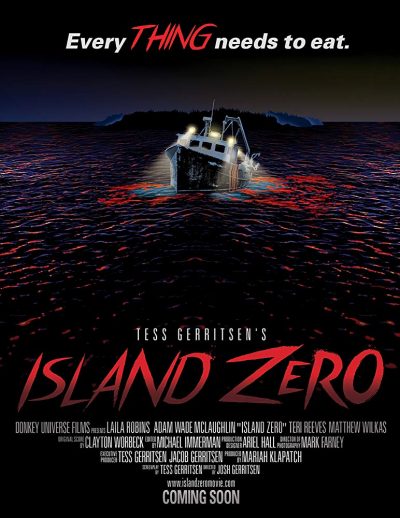 The first half of this is really good: a masterclass which is right up there with Them! in terms of generating tension without showing anything. It feels like a combination of The Mist and Tremors, combining the unseen lethal terrors of the former, with the plucky band of locals from the latter. Indeed, given the location, the similarity to a Stephen King adaptation is particularly obvious. [The script was actually written by the director’s mother, Tess Gerritsen – best known as the author behind Rizzoli and Isles] It works very well: you’re left to come up with your own imagery for what the near-invisible killer or killers look like. I was more or less hoping it would go full-blown Cthulhu.

At around the half-way point, Chris turned to me and said, “I hope the monster isn’t crap.” This echoed my unspoken fear, which had been exactly the problem with Them! [One word: pipe-cleaners] Probably inevitably, it is something of a disappointment, for things remain hidden and visible largely only through a special camera, which one of the island kids was conveniently given for Christmas. But I’d rather have no monster than a bad one. The film does a fairly decent job of making a turn into Alien territory, with not everyone present being on the same page with regard to the creatures. I’m unsure it was necessary, perhaps taking away from a film which was doing perfectly well as a simple survival story. Yet it’s hard to object too much, any more than we could complain about the Jaws knock-off moment, with the grizzled veteran telling a watery horror-story.

It’s clear the makers were limited by their budget, likely only a fraction of that for The Mist. Yet they have worked around those restrictions remarkably well, and the results show that good things can still be achieved on limited resources. Much credit goes to Mark Farney’s cinematography, which looks great. Particularly impressive is the sequence shot from overhead at the ferry dock, which really brings home the isolation in which the characters find themselves. While I’d love to see what this would have looked like on a hundred million dollar budget, I’m far from sure that would have improved the entertainment value by a similar ratio.