Once in a while, there comes along a movie which is so staggeringly bland, I’m tempted to pretend I never watched it, so I don’t have to review it. This is one such case, where I know right out of the box I’ll be struggling to reach my federally-mandated five hundred word quota. This is your usual “group of friends go to a remote location for a break, and get terrorized by psychos” film. The sole twist is that lead character and obvious “final girl”, Sloan Carter (Santo) recently lost her sight. Not that you’d know it, because we first see her, roaming around town and getting groceries, in a miraculously undisabled way which makes it seem like she has been blind since birth. Or is perhaps part bat. 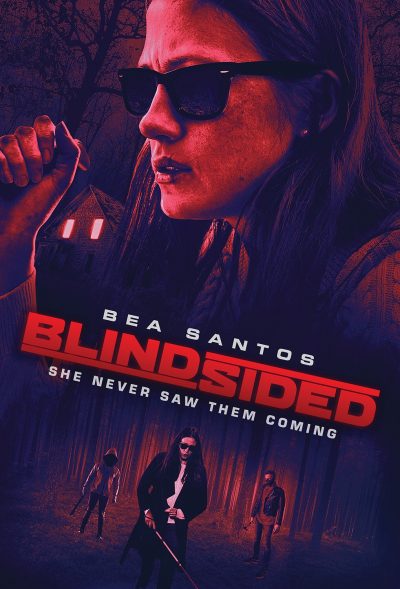 Her father is a criminal psychologist, a choice of career which, ir’s painfully obvious, is going to be significant to the plot later on. She heads off with friends Mika (Shankar) and Toby (Knudsen) for a few days in the family cabin. Dad is a bit concerned, because it’s the first time he has left Sloan on her own since her vision thing. But it’s okay, because one of his students, Tom (Mitchell), will be popping round to join them for the night. After the trio go off to and return from an entirely pointless party, the weirdness starts. Sloan stumbles into a dead body dangling on the porch – again, she’s able to identify what it is with such remarkable speed, you have to wonder exactly how many corpses she has previously groped – and there’s a strange woman lurking, menacingly, outside.

Things unfold from here exactly as you’d expect, with a moderate amount of running around and stabbing, and we discover that not everyone is who they seem to be. Which might have been fun, if only that had included Sloan revealing she’d been making up the whole blindness thing all along, purely for the LOLs. It would have made sense, because her disability is hardly even a minor plot-point, and she’s able to whizz about at a pace barely less than someone with two functioning eyes. Though the lighting here frequently seems to be trying to simulate legal blindness for the audience, apparently out of some misguided attempt at generating empathy.

The story is riddled with problems on most other levels too: it takes too long to get going, isn’t interesting when it does, and then fails to build to anything approaching a climax. It’s also blindingly obvious (pun somewhat intended) who is the cuckoo in the nest, from the moment the police don’t show up. While exhibiting a basic competence on most technical levels, there’s absolutely nothing here to make this even marginally interesting or novel. It squanders any potential of its main original asset, a sightless heroine, and doesn’t provide any compensating factors to make up for it.