Back in my London days, I occasionally used to let a friend drag me to the ICA on The Mall for “performance art” pieces. The one I particularly remember had a woman, standing naked in a tin bath, pouring milk over herself while shrieking at the audience like a banshee. This is the cinematic equivalent: an experience which is far more a chore to be endured, with your main reaction when it ends being, “Thank god THAT’S over.” Inexplicably described in some places as a “thriller”, I categorically refuse to categorize this as one, because it contains absolutely nothing remotely approaching a thrill, of any kind. 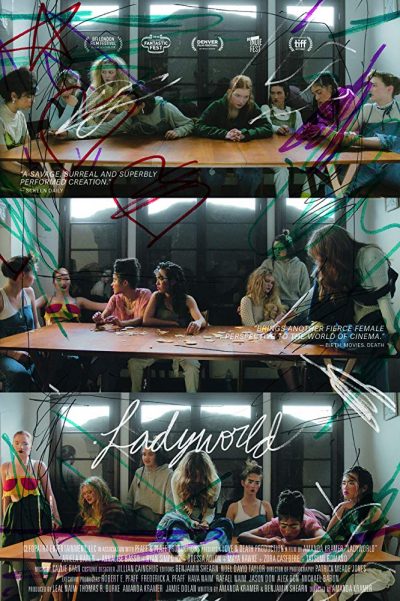 I was expecting something like a female take on Lord of the Flies, given this synopsis: “Eight teenage girls become trapped in an endless birthday party after a massive earthquake. The girls’ sanity and psyches dissolve as they run out of food and water.” While technically true, the execution of the story is incompetent on every level. It’s “art” in the same sense as a banana taped to the wall. Except, as someone proved, the banana is edible and therefore has some purpose. This is useless from the moment you notice that the supposedly “buried” house has broad daylight coming in the top of the windows, as can clearly be seen on the poster (right). Even semi-competent characters would have been free in quarter of an hour, tops.

Instead, however, we have to suffer 93 long minutes in the company of this useless bunch, where barely two pass without someone having a hysterical fit of one kind or another. Usually involving shrieking. It’s like you are trapped in the worst slumber party ever. For these are, to a young woman, entirely undeveloped as characters, without depth or shading. One feels it should take weeks or longer for a complete mental collapse of this magnitude – Lord of the Flies unfolded over a period of several months. Yet here, there’s no indication of the passage of time. It seems that almost immediately, they’re petrified of The Man, a fear relentlessly and tediously pushed by Piper (Basso). This causes most of the other girls to degenerate into face-painting clowns within minutes, for no particular reason. Except for the doll-clutching Dolly (Simpkins). She should never have been let out of her psych ward to begin with, so what she’s doing at this supposed birthday celebration is unclear.

If a man had co-written and directed a movie populated by such ludicrously fragile examples of the female personality, he’d likely have been crucified on Twitter as a misogynist. But the worst thing is the atrocious avant-garde soundtrack. There’s a sample above, which manages to combine girls whimpering like tortured puppies, over other girls apparently imitating bagpipes being deflated. It’s the kind of self-important pretentiousness for which I have a strict zero-tolerance policy, and with which the film is filled to overflowing. I’m sure my ICA-going friend would have loved it.