“A leaf bit me?” That’s about the level of stupidity we are dealing with here, and an equally loopy concept: “Jack Woods is a simple man who finds himself in an extraordinary situation when he must rescue his estranged wife, Jill, from Genetically Modified killer trees.” Yeah, you pretty much had me at “Genetically Modified killer trees”. I think it was the gratuitous capitalization which did it. Now, it is possible to take this, and do it in a way that extracts the comedy and/or the horror from the idea of killer vegetation. The Evil Dead played it straight, and managed to deliver one of the film’s most unpleasantly memorable moments, with the infamous “tree rape” sequence. Meanwhile, Jason Eisener, who’d go on to make Hobo With a Shotgun, took a less serious approach in the gloriously silly and gory Treevenge, which you can see here. 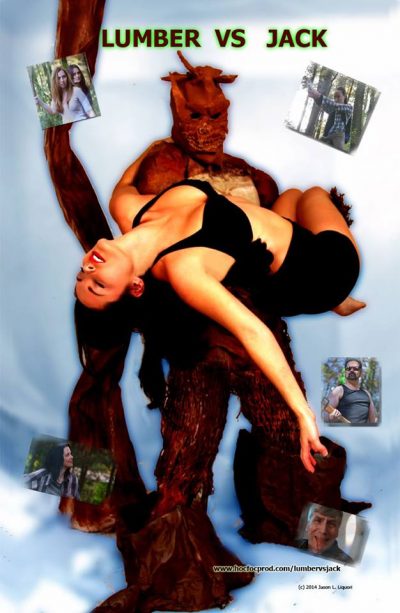 Liquori is clearly going for the latter, but doesn’t have anything close to Eisener’s chops. The result is feeble, especially on the technical aspect, with so much which is utterly derisory. When hero Jack (Liquori) meets Brad (Welch), the mogul behind the killer trees, it’s clearly filmed in someone’s spare room, from which they haven’t even bothered to remove the boxes. The effort to explain this, as being in order to avoid corporate espionage, only draws attention to the shortcoming. The audio varies from adequate to almost entirely inaudible, not helped by a mix which can’t figure out where the dialogue should go. And the effects are largely terrible too: no better than shooting branches being pulled off things, and running it backwards, and usually worse (see image at top, for an example).

In many ways, it’s dreadful that shit like this is available in Walmart, while many, far superior films are unable to find distribution. Goes to show that concept matters more than execution. Yet, I’ll confess, we did watch it. All the way to the end. And it occasionally embraced its terribleness, in ways that were quite endearing. Take, for example, the car accident, clearly staged with a Hot Wheels model in stop-motion. And if Jack is the poster child for why directors should never act in their own films (see also: Tarantino, Quentin), I enjoyed the two likeable hikers, Jody and Michelle (Wenger and Prenez), who stumbled into the lethal forest. You might say, I was rooting for them. Hohoho.

It’s one of those cases where you could take the various elements, re-arrange them somewhat, and you might potentially end up with a cult classic. Instead, it’s something which grates more than it amuses. Though it isn’t quite bad enough to stop me from watching the sequel, Jack vs. Lanterns, even if that’s a decision I’m probably going to regret. Not least because I ran out of whisky in this one, playing a drinking game where I took a shot every time someone was killed by a tree. Don’t try this at home, folks.