While undeniably low-key, I appreciated the small-scale pleasures this provided. And emphasis is entirely on “small”. It all takes place in a single location, with a cast which can be counted on the fingers of one hand, if you’re not including the rabbit. Though perhaps you should, for this is not a gratuitous rabbit, it is a rabbit entirely necessary to the plot. And let’s just say, I sat through the entire end credits. specifically to see if there was any statement that No Animals Were Harmed in the Making of This Film. 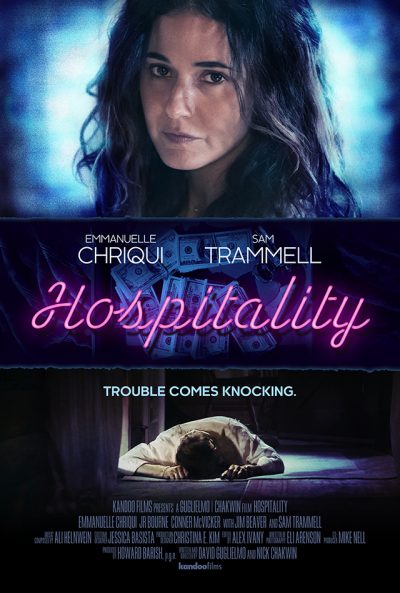 Donna (Chriqui) is a former prostitute. Very former: she is now two decades removed from that line of work, and running a small-scale and not too busy bed-and-breakfast with her “touched” son, Jimmy (McVicker) and his pet, Spiderman the rabbit. But her past is murkier than that, and has certainly not been forgotten by the local sheriff Zane (Bourne), who occasionally pops round aggressively, for a booty-call or cut of her takings. And things get infinitely more complex with the return of Cam (Trummell), just out of jail after a long incarceration, followed rapidly by his former accomplice (Jim Beaver. whom we know from Supernatural as Bobby Singer).

Secrets are revealed, dead bodies arise and, yes, it is possible that rabbits were harmed in the making of this film. It’s all rather predictable, and I was calling the major plot points before they showed up. Yet it’s one of those cases where a film doesn’t particularly rely on the revealing of twists. Indeed, it lends this an almost Shakespearean sense of tragedy, given the apparently inevitable progress towards a violent end. The story, which does have an excessive reliance on contrivance e.g. the issue of Jimmy’s paternity, and some questionable moments, doesn’t really matter. For I found the other positives outweighed its negatives.

The performances are probably the most important of the former. All of the actors fit their characters’ traits well, Chriqui in particular bringing a sympathetically world-weary air to her performance. Donna is someone prepared to do whatever is necessary to protect Jimmy, yet knows she – and by extension, him – is at the mercy of Zane and his whims. Sam is more difficult to read, and it’s hard to be sure whose side is he on, while Zane is a largely unpleasant man, intent on exploiting any situation for his benefit. So you have a triangle of good, bad and somewhere in the middle, providing a strong enough foundation to overcome the occasionally shaky plot.

There are even occasional moments of humour to relieve the tension – not the least of which involves the rabbit, bless his frantically beating little heart. Overall, this may be the best bunny performance since Watership Down, and it’s just a pity Spiderman never got to take revenge on his tormentor. Ideally, also giving Donna the chance to quote Monty Python: “Look, that rabbit’s got a vicious streak a mile wide! It’s a killer!”