D’you think the film-makers deliberately chose actors whose names might be mis-read by a skimming Redbox customer? For I would be far more likely to rent this, if I thought that it starred Marilyn Manson and Michael Myers. Just a thought. Anyhoo. Amanda (Wathen) has been desperately seeking employment for a while. So she is delighted to get a call from Mildred (Mason), who runs a hotel in the remote town of Mitchell, Oregon, looking to hire Amanda as a live-in housekeeper. At first, everything seems normal, though Mildred’s son Billy (Meyer) is a bit… strange. But one day, Amanda discovers she is pregnant. Which is very weird, because she hasn’t had sex in a while. Maybe it’s related to that night where she inexplicably got blackout drunk? But before she can figure it out, she’s tied to a bed, with her mouth sewn shut, and being prepared to become Billy’s bride. 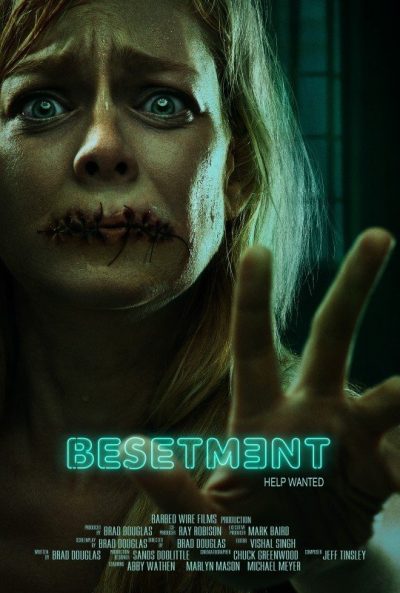 It probably says something that I spent much of the film idly Googling about the town of Mitchell. It is indeed a very small place, population less than 150, subject to occasional flash flooding from the Bridge Creek which runs through town. It was probably most notable for the one-time presence of Henry the Bear. And in a spooky coincidence, I was just reading the linked article when Henry made a guest appearance in the film. What are the odds? That I am telling you all this should inform you about the minimal pleasures to be found here. Even at a brisk running time of 76 minutes, it overstays its welcome, especially in taking too long to get to the horror. When you are bringing in gratuitous ursine cameos, as mentioned, you have a problem with the pacing of your movie, especially because the basic concept is obvious. Mildred is simply too nice to be anything other than barking mad. In that aspect, it reminded me of Matriarch, though that at least had a genuinely rural setting to assist in its plausibility.

For it’s never quite clear what Mildred’s plan here is. It all seems ill-considered, and largely uninteresting, with elements which peter out, such as Amanda’s alcoholic mother, who appears to exist simply to provide an entirely unnecessary contrast to Mildred. The only moment which will stick in my mind is an extraordinarily creepy sequence, which sees Mildred jerking off her unwilling son, to provide the sperm with which Amanda is impregnated. If this had taken place earlier than it did – at the time when it occurred, say, during the heroine’s blackout – it might have helped sustain interest. Instead, by the time it arrives in flashback, I’d more or less given up. The film instead builds to the least credible marriage ceremony in cinema history, in front of a minister who waves off Amanda’s condition with little more than “Is she alright?” It then manages to become even more silly, which I guess is something of a feat. If only the bear had shown up again.