It seems that Scotland is the Alabama of British cinema. Want to put your soft, urban characters in peril, by having them stuck in a perilous (yet scenic) location, where they can be menaced by the locals? Come to (probably not-so) sunny Scotland! Just replace those ominous banjos with bagpipes… In this case, the poor city-dwellers are Rachel (Blackwood) and Matt (Vickers) Hopkins, the former heavily pregnant, who are driving through the Scottish countryside, when their journey is derailed, first by a diversion, then by an accident. 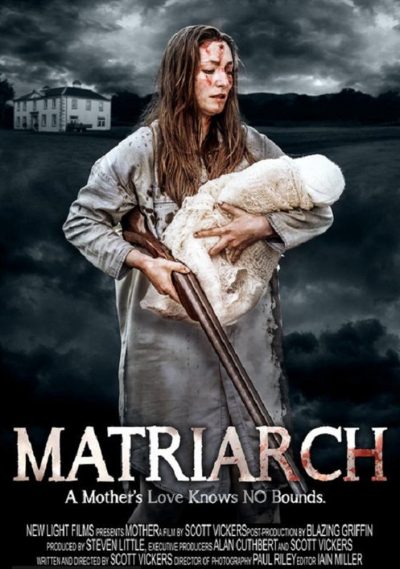 Seeking help, they end up on the farm of the Fairbairns, whose are thoroughly unwelcoming until they realize Rachel’s expectant state. After the Most Awkward Dinner Party ever, ruled over by the titular leader, Agnes Fairbairn (Hannan), Rachel realizes where she has seen their hosts’ daughter before: the girl was part of a family who vanished without trace in the area some time previously. Increasingly rattled, she and Matt attempt to leave, only to find Agnes and her shotgun-toting husband are having none of it. Indeed, the plan appears to be to make Rachel’s impending rug-rat, the latest member of the Fairbairn clan. And this is a plan which renders Matt entirely superfluous…

For a cheap film, with a budget of less than £50,000, this is impressively solid, anchored in particular by a great performance from Hannan. In the early going, she manages to nail perfectly the combination of being both impeccably polite, while simultaneously “off” – not least in the relationship with her two “sons”. Later, the mask of normality falls away entirely, and we head deep into a tour of BatshitCrazyVille, which is perhaps even more fun to watch. Props also to Alan Cuthbert, playing husband Bob, who often seems largely to be going along with his wife’s religion-inspired delusions for the sake of a quiet life. Most spouses have been there – albeit perhaps not quite to the level of complicity in kidnapping, rape and sundry other brutality.

The film’s biggest weakness is probably Matt, who serves little or no purpose as a character. He does trigger a moment of truly eye-rolling stupidity from the two sons, which had me muttering under my breath, “If I ever become an evil matriarch…” Otherwise, Vickers would have been better off staying behind the camera, where his talents seem more effectively utilized. I’d probably have enjoyed seeing a bit more of a knock-down brawl at the end, between heroine and villainess. Given the cost here, I’ll settle for what we get, though it is a little odd that the film’s most memorable sequence thus probably remains the dinner party, rather than its supposed climax. I may also need a second viewing, to decide whether the final twist is one that makes sense, or if it’s a cheat. For now, we’ll give this the benefit of the doubt, and call it a satisfactory and pleasant surprise, even if not exactly an advertisement for the Scottish Tourist Board.