Not the first female-directed anthology in horror, since this follows in the footsteps of XX (2017). And, surprise: it has more or less the same set of positives and negatives as that. Though a lot of these are common to many anthologies – not least that, by their very nature, they’re going to be variable. At least in XX, I believe the components were made specifically for inclusion there. This is more like a horror shorts mix-tape. A dozen pre-existing films on the topic of women’s vengeance have their credits removed (which, on occasion, makes it hard to tell where one ends and the next begins), and are stitched together in four loosely-connected sections such as “Anger Mismanagement”, introduced by a housewife from hell (Gomez). 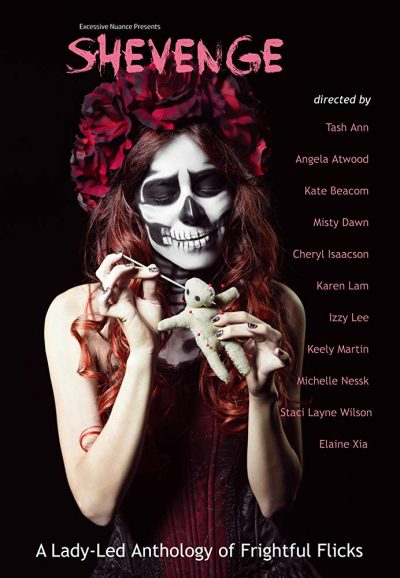 Saying the results are uneven would be like calling the Himalayas “slightly uphill”. Three of the twelve are decent enough that you wouldn’t mind seeing a feature-length version of them. Lady Hunters has a middle-aged trio of vigilantes, taking out the trash, and gained points for its amusingly accurate depiction of moving a dead body. Glass Ceiling is about two hitwomen, who decided to take matters into their own hands, after discovering that they are getting lower pay than their male colleagues for the same work. And Metamorphosis (top) plays like a distaff version of an Anthony Wong flick like Human Pork Chop, with a restaurateur finding a tasty way to get rid of the evidence left behind after the death of her abusive spouse.  None of these overstay their welcome, and they also go easy on the didactic lecturing.

The others… not so much. They frequently topple over into rampaging misandry, and as a whole, this comes over as less empowering than bitter screeching. Too many of the film-makers seem to confuse being anti-man with being pro-woman; they’re not the same thing at all. [I’m pretty sure the gender ratio of those being mean to women isn’t the 11:1 or thereabouts portrayed here]. As a result, the agendas become painfully apparent when you’re sitting through slightly different flavours of the same “all men are bastards” recipe time and again. That doesn’t exactly improve with repetition, shall we say. I should mention Chris was similarly unimpressed, so this isn’t just the voice of my white male privilege gaslighting you on behalf of the patriarchy, or whatever.

The apparently obligatory experimental short, Just A Girl represents the low-point. It had me asking Chris if I could bring her anything from the kitchen, in a shallow attempt to escape the copious art-wankiness, and probably needs to come with a warning. Not for the strobing lights, but because it sucks. And sucks in a pretentious fashion, to boot. With a running time of 118 minutes, this is a good thirty too long; producer Wilson probably needed to have been better at saying “No,” and meaning it, with regard to some of the offerings. Never mind #MeToo, I’m going with #NoThanks. Or, at least, #NotAllWomen.