Netflix are now officially playing with the big boys, financing this movie’s $159 million budget. You can see the lure. Scorsese? De Niro? Pacino? All working together on a movie about gangsters? Where should the Academy send the Oscars? The reality isn’t quite as perfect. While clearly territory with which Scorsese feels familiar, it falls short of the likes of Goodfellas or Casino. The main problem is, I think, De Niro, who has been phoning in most of his roles for a while now. Here, once you get past the technological marvel of seeing him digitally de-aged, there’s not a lot which will stick in your mind. 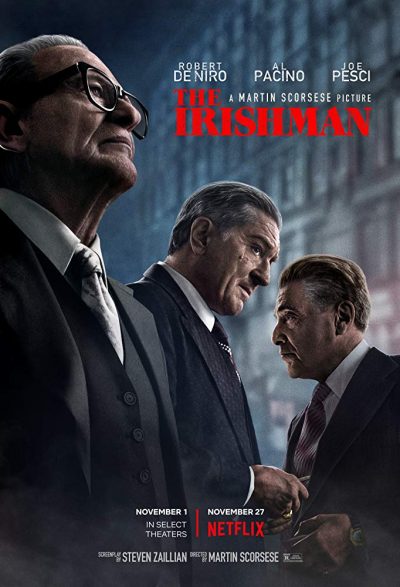 He plays mob hitman Frank Sheeran, originally a meat delivery driver until he gets involved with organized crime, and begins to work for them. In particular, he’s introduced to Jimmy Hoffa (Pacino), the leader of the powerful teamsters’ union, and becomes a trusted confidant. Over the years which follow, Hoffa rises, falls, and is attempting to rise again in the first half of the seventies, after finishing a prison term. But Hoffa has now dropped out of favour with the mob, and despite Sheeran’s efforts to rein in his friend, there’s a certain point beyond which even the union man is more trouble than he is worth.

At 229 minutes, this is probably a good 45 too long. Most of the superfluous scenes come at the end, after the disappearance of Hoffa. You quickly realize that it has been Pacino who has been holding the film together, not De Niro, and the former’s absence is sorely felt. The rest of the film is mostly Sheeran moping about, feeling sorry for himself. He ends up abandoned by family and friends, living alone in the nursing home which also provides the movie’s opening shot. It may be the most over-stretched ending since Return of the King, albeit with considerably less hugging.

I was surprised to learn this is the first time Pacino has worked with Scorsese. It feels like the actor should have been part of the director’s stock company of regular players, alongside De Niro, Pesci and Harvey Keitel. If there are any awards to be won here, he should be in the front row, and Hoffa is simply more interesting – both as a character and as depicted by Pacino’s portrayal – than Sheehan, who doesn’t have much to offer. Although there are a couple of weird subtexual moments, hinting that Hoffa might be gay and/or rather too interested in Sheehan’s young daughter. Not quite sure where they came from.

Far more entertaining is his perpetual bickering with rival boss Tony Pro (Stephen Graham), over things as diverse as meeting attire, how many minutes it’s acceptable to be late, or whether “you people” is a racial slur. That’s vintage Scorsese. Despite an abundance the usual techniques i.e. voice-overs, contemporary music as commentary, a super-macho world where women are largely irrelevant (Anita Sarkeesian prepares a poorly-considered Tweet…), I just didn’t feel there was enough to fill the vessel crafted here.