I wanted to like this more than I did. It’s an interesting set-up, an idea with potential, and a decent cast. But the pieces just never seemed to gel into a coherent whole, and the structure in particular seems problematic. After a brief introduction which tells us this is a future Britain in civil war, where the UK Liberation Army is fighting the authorities, we begin with a woman (Macdonald) waking up in the windowless room of the title. There, she is subjected to various torments, e.g. heat, cold, electricity, apparently with the aim of extracting information from her. The perpetrator appears to be a bearded man (Fehr), though the woman insists she is just a low-level worker, without the knowledge he seeks. 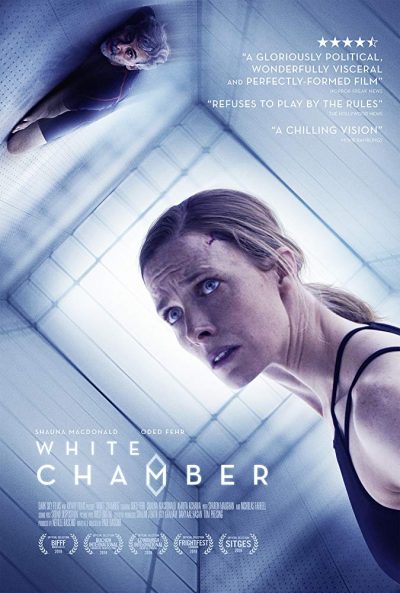 Flashback five days, and things are radically changed. The man is now the one in the room, and turns out to be Zakarian, leader of the UKLA. The woman is Dr. Elle Chrysler, a researcher who has been tasked with developing a super-methamphetamine which can be given to soldiers in the field to improve their stamina, pain tolerance, etc. Zakarian has just become a unwilling guinea-pig for her tests. Yet it isn’t quite as impartial and purely scientific a process as it might initially appear, for she has some very personal reasons to hate Zakarian with a passion. However, a newly arrived lab assistant, Ruth (Acharia), finds herself increasingly disturbed by her boss’s willingness to go beyond the boundaries of ethical medical research.

You definitely have to stick with it, in order to see how this eventually connects up with the start, and it requires what can only be called a cheat to get there. You probably also need to put aside questions such as why the government has handed a Very Important Prisoner like Zakarian over for vengeful vivisection. I did appreciate how at least some initial effort was made to be somewhat even-handed, with dialogue such as, “You and I both know that when this ends, there will be no winners. Only survivors.” However, the further in we get, the clearer it becomes that one of the main characters is losing their grip on sanity [Actually, possibly both of them, just in different ways], and the more sympathy is angled away from that player. Before we reach the end, all subtlety has been entirely tossed out, in favour of things getting a bit stabby.

There are more interesting stories to be told here, illustrated by a brief shot in the prologue of Buckingham Palace getting blown the hell up. It’s clear the budget wasn’t up to those, opting instead for the far cheaper alternative: a single location and cast which, for the most part, can be counted on the fingers of one hand. Even though this isn’t at all what I was expecting – mostly based off the 30-second of clippage Netflix threw at me – I’m not sure it offers any palpable improvement over those preconceptions, and ends up feeling like a rejected Black Mirror episode.