At least in the beginning, this is slightly different from the usual zombie film, in that it takes place after the apocalypse has been contained – albeit at the cost of two billion lives. Life for the survivors has largely returned to normal, though the trauma of the events will never go away. In the post-post-apocalyptic world, on an island off the North African coast, the titular location has been set up, in which visitors can hunt zombies, safely. Those attending have a variety of motives: Lewis (McCann) and Melanie (De Gouw) are a couple who want to overcome Melanie’s PTSD; Jack and Alfie won a video-game tournament, and are looking forward to shooting the real thing instead; the reasons why Archer (Scott) and Sadie (Rhys) are there, are rather less apparent, at least initially. 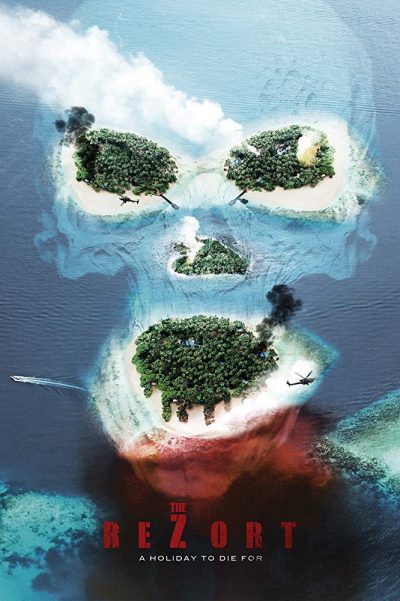 f course, stuff goes wrong, in a way so obviously cribbed from another film, they might as well have called this Chew-rassic Park (Chew, because they’re zombies. I’ll wait). Stranded in the middle of very hostile territory, the visitors have to make their way back to the docks and get off the island. Time is of the essence, because the breakdown has led to the Brimstone Protocol being triggered, in which the entire island will be wiped off the map, to prevent the outbreak from spreading further. [Why it’s necessary to flatten an island to contain an outbreak which already seems contained… because it’s on an island, is something the film never bothers to explain.] On the way, they’ll find out the rezort’s nasty little secret. Which Chris guessed ten minutes in – even before it was blatantly red-flagged by the situational set-up, or lines like, “If we can treat the dead like meat, then who is to say the living won’t be next?”

The set-up is better than the execution. The time of recovery after a disaster like this seems an aspect considerably less well-explored. This is probably because it’s considerably harder to make interesting, than the simple story of survival you can write while your disaster is in progress. The movie seems to realize this about 30 minutes in, largely reverting to generic type, and abandoning the world outside. Therefore, we get the running, chasing and being nibbled on, familiar from a thousand previous entries. What stuck in my mind most was the horrendous job matching the desert-like footage shot on the Canary Islands, with what looks like scenes shot in Wales. The two landscapes could hardly be more distinct, not least on the vegetation front.

As a zombie film, it’s okay. Scott, channeling Jurassic Sam Neill, is functionally taciturn, and his competence is a refreshing change from all the other characters, for whom glamping would probably prove a hardship. Once it gets going, it is, at least, consistently active, and they do explain the presence of zombies of variable speed (basically: the fresher, the faster), which help enhance the variety of the attack sequences. But zombie fatigue has long since set in for me, and it takes something really different to alleviate those symptoms. The Rezort is not it.