This is, absolutely, a film you need to see while knowing as little about it as possible. The more you know, the less of an amazing surprise it will be. This review is therefore going to fuck it up for you, good and proper, if you haven’t already seen it – especially because it can’t be discussed properly without spoilers. Therefore: see it first. Trust me, you won’t regret it. You can then come back here and agree with me about how great it is. If you read on, and see the movie later, it won’t be as impressive – and that will not be my fault, okay? 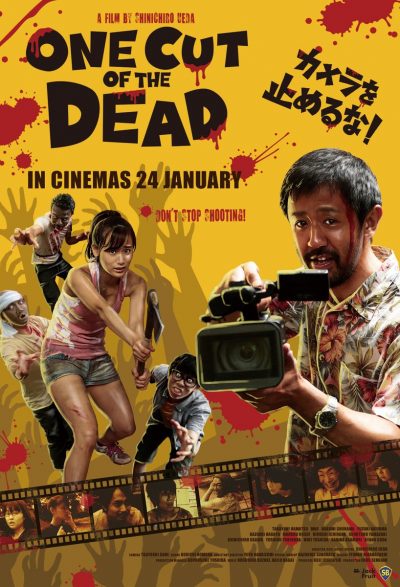 Ok. We good? So, as we all know, having watched the film… Right? AS WE ALL KNOW… /glares, this is a masterpiece of meta-cinema. It starts off looking like a low-budget zombie movie, before morphing into the making of a low-budget zombie movie. The set then comes under attack from actual zombies – something the director welcomes, relishing the genuine terror this brings to the actors as they have to fight for their lives.

After 37 minutes, shot in a glorious single take, the credits roll. And we flashback a month, discovering that this “real” zombie attack was actually a feature made for a zombie TV channel, broadcast live. We then see how the makers reached the point of what we just watched: and it’s this which makes the film so innovative and awesome. For every flaw that we noticed during the original broadcast – bizarre dialogue, unnatural pauses, and even a character coming back from the dead – are explained by the chaos we discover was unfolding in the background. For example, there’s a point where one character suddenly asks another if she has any hobbies. What we don’t see initially, is the off-screen sign being held up, ordering the cast to stall for time, because of a problem with another actor.

Given this, it’s a miracle the final result was even watchable, and while this is usually described as a horror-comedy, it really isn’t. The “horror” aspects are almost entirely tangential – they could have been making a heist film, and it would have made little or no difference. [The film credits a play, Ghost in the Box, as its source material, though it appears this was added after complaints from the author. I suspect it was probably not zombie-themed] This is much more a farce about the perils of making low-budget cinema – from the jobbing director (Hamatsu), who proudly proclaims himself “fast, cheap and average,” through to the actor with a bloated sense of ego, perpetually emailing ludicrous requests to the production staff.

And that’s all before we get to the problems on set. For example, the chief zombie is an alcoholic, who half-inches the jumbo-sized bottle of sake being kept for post-broadcast celebrations. Fortunately, the line between “drunk” and “undead” is a thin one, even if his projectile vomiting is a tad… unexpected. [Ueda does seem to love him some bodily-fluid humour; another actor comes down with explosive diarrhoea]. Yet it’s all affectionate and rather uplifting, thanks to the can-do attitude of the director and the family, who lead the crew from the front, with impromptu adaptations, as the whole event teeters on the edge of cancellation. This climaxes in a combined effort, everyone coming together (literally) to create with pure manpower, the crane-shot necessary for the film’s climax – their actual camera-jib having fallen off a roof to its doom.

It’s a love letter to the world of micro-budget film-making, illustrating both the problems and the remarkable effort put in by those involved in it. Having been involved in our fair share of such productions, we can attest to the accuracy of both depictions here. And unlike some takes on the topic (e.g. spending $10 million on a movie about the making of The Room), this practices what it preaches, with a total budget around $27,000, and shot in eight days. Yet it took more in Japan than Ready Player One or Solo: A Star Wars Story – almost one thousand times its budget, a remarkable feat. 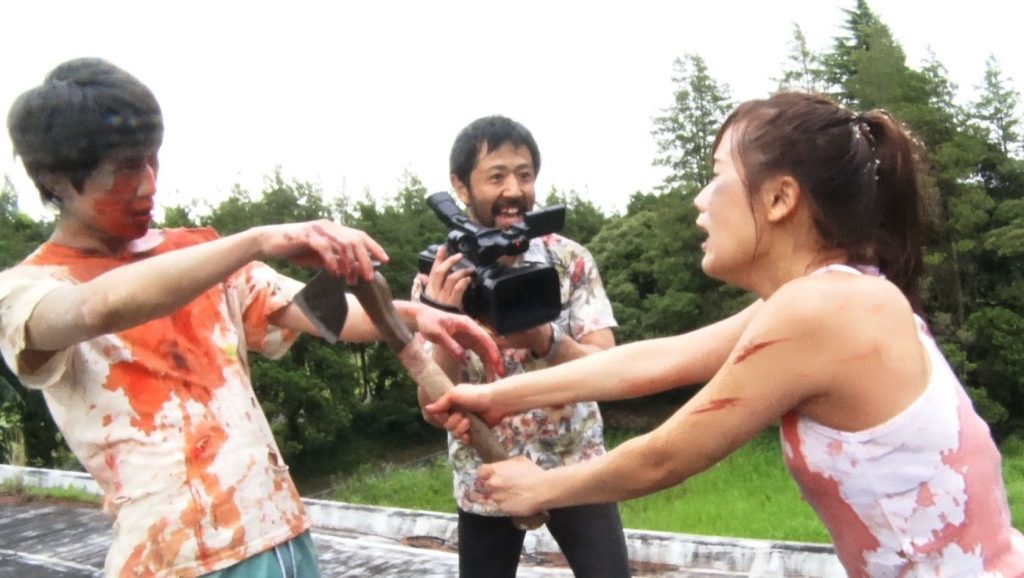 The final section is where everything comes together, and the true genius of its elaborate construction becomes apparent. You’re watching footage shot by film crew #1, of film crew #2 making a movie, in which film crew #3 are making a movie about being attacked by zombies, when they are attacked by zombies. It makes my head spin simply thinking about it, never mind having to organize the structure behind creating this Moebius-strip/Russian Doll of a movie.  And then, having the audacity to open it with one of the most memorable single camera shots in genre history – whatever the genre! Well played, Mr. Ueda. Well played.

It’s the kind of film where you get to the end, and immediately want to watch it all over again from the beginning, in the light of everything you know now. I’m not sure it would have as much impact, simply because you wouldn’t get those glorious “Ah-hah!” moments, where something which was puzzling at the time, suddenly makes complete sense given subsequent knowledge. However, it would still have its delights, such as a slew of winning performances. Hamatsu is the glue that holds everything together – both in the film and the film-within-the-film. But Mao as his daughter, who finds herself dragged deeper and deeper into the unfolding catastrophe, is solid as well. And in the supporting roles of make-up woman/self-defence expert and producer, Syuhama and Yoshihiko Takehara both make an impression greater than the size of their parts.

There’s no denying this is a gimmick movie. Yet it manages to deliver everything it sets out to do, and more. Considering the potential for woeful failure, that’s undeniably impressive, and it’s exactly the kind of risk-taking which independent films should be doing. I’m curious to see what Ueda does next, though he’s got a hell of a lot to live up to. For everyone else, the bar for ow-budget movies just got raised.