Personally, I would be extremely wary about getting involved in any film being made by Herzog in South America. I’ve seen Aguirre, Wrath of God . I’ve seen Fitzcarraldo and the documentary about it, Burden of Dreams. Screaming. Threats of murder. Folly. Of course, I suspect the late Klaus Kinski’s presence might have had something to do with these things. I can’t help wondering what this might have been like, if Ferres had been replaced by Kinski. Probably a bit less subdued. She plays Laura, part of a team of scientists sent by the UN to investigate a corporation’s role in “El Diablo Blanco,” an ecological disaster which has resulted in a formerly thriving sea being turned into a toxic salt flat. 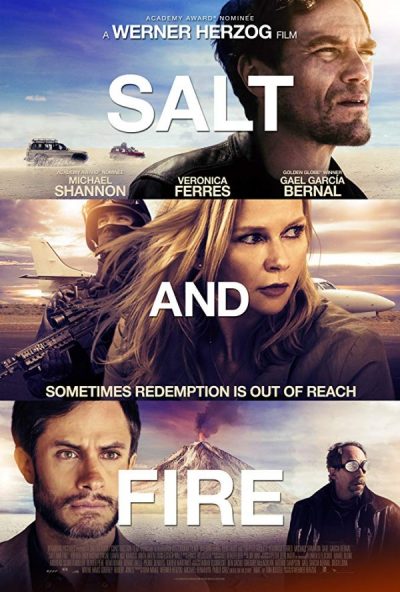 On arrival, she is promptly kidnapped by the corporation and taken to a remote hacienda for discussions with the company’s CEO (Shannon). He takes her out into the middle of the salt flat and abandons her on a pile of rocks, with two blind local kids, and some food. I guess it’s the Herzogian version of “Sit in the corner and think about what you’ve done.” If this had been Kinski, his character would doubtless have been driven mad by the emptiness of it all. Laura… gets a bit annoyed when one of the kids kicks over a water-bottle.

This certainly has the potential to be one of the dullest films in history. Yes, somehow, it managed to hold my interest better than many films with considerably more giant fireballs. I wouldn’t necessarily call it good, and certainly won’t be rushing to watch it again. But it has a fascinating tendency to wander off in directions, for no apparent reason other than Herzog finds them interesting. For example, a subplot involves the rumblings of potential super-volcano Uturunku. This is likely present, simply because volcanoes have been a lifelong source of fascination for Werner, having made multiple documentaries about them. Similarly, the purpose of the discussion about anamorphic art, and in particular an example at the Trinità dei Monti convent in Rome, entirely escapes me.

Inexplicably described as a “thriller”, it’s about the least thrilling movie I’ve seen, with a meandering narrative, no sense of escalation, and a conclusion which makes as little sense as anything else in the film. Yet it’s so damn contrarian, I couldn’t help but appreciate its wilful disregard for convention. The cinematography is stunning, and the landscapes portrayed no less memorable – although in a completely different way – from the Amazonian jungles of Herzog’s work with Kinski. I’m prepared to cut Werner a lot of slack. He’s earned it, and even though his films are now largely crap (at least the narrative ones; he seems to care more about the documentaries), they do at least have ideas and are executed with style. You know that Herzog doesn’t give a fuck about focus groups, and is making the movies he wants to make. We could do with more Werners in the film business.