This is a typical Lars von Trier film. He’s a bit like Quentin Tarantino, in that both are in love with their own art: in Tarantino’s case, it’s his own dialogue, while von Trier leans more towards his adoring his own imagery. This certainly feels like it could easily be an hour shorter, not least because there’s precious little indication of development or progress over the course of its 150+ minutes. Jack (Dillon) kills a bunch of people in various ways, while explaining himself to Verge (Ganz), a largely unseen interviewer who is revealed at the end to be Jack’s guide, in a sequence which particularly lumbers on past its purpose. 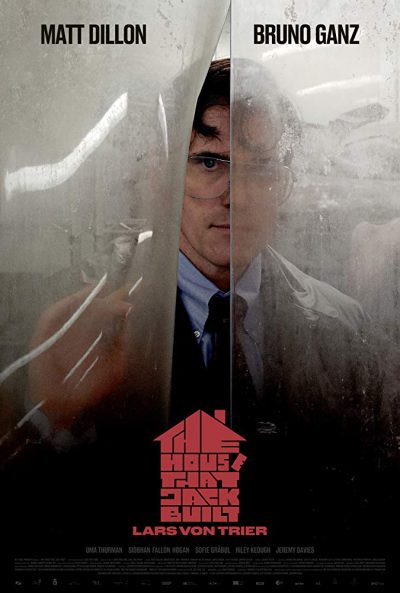 It has its moments, certainly. The first scene, where he helps a lady with a broken-down car (Thurman), is especially interesting. He seems to be doing his level best not to kill her, but she keeps on goading and insulting him. By the point when he finally snaps, your reaction may be to cheer him. Early on, we discover he has OCD – a bit of a mixed blessing for a serial killer – and seems almost to want to be caught, engaging in highly risky behaviour, such as dragging the corpse of one victim behind his van. He believes his murders are art. If it’s not quite “serial killer as hero,” it’s certainly “serial killer as potentially interesting and complex character.”

The film likely reaches its “This is seriously fucked-up” peak during a picnic with the third “incident”, involving a woman (Sofie Gråbøl) and her two kids. Right from the moment you realize the set-up, you’re on the edge, waiting for things to kick off. Foreshadowing suchas Jack’s explanation of how it’s important, when hunting, to start with the smallest fawn and work up to the mother, doesn’t help. The problem is, von Trier has nowhere to go the rest of the movie. It’s pretty clear Jack is a stand-in for the director, arranging his corpses in set-pieces. Yeah, we get it. No, really: we get it, as shown by the recycling of footage from previous LvT works to illustrate Jack’s visions.

The fourth and fifth “incidents” deliver sharply diminished returns, Jack degenerating from that potentially interesting character to a vapid, whiny and entitled pseudo-artist. [Cynics may suggest this is, indeed, an accurate representation of von Trier’s career. Dancer in the Dark and The Hospital seem a very long time ago. Oh, hang on: they are] According to its creator, this is celebrating “the idea that life is evil and soulless.” While that’s a valid enough viewpoint, it strikes me that von Trier is part of the problem there, and seems increasingly intent on generating and courting controversy for the sake of it. Here, he starts off well enough, yet by the end, it’s the audience who may feel trapped in hell.

Though I guess I’ve never seen a severed breast turned into a wallet. So there’s that, I suppose?