This demonstrates the apparently ever-increasing gulf between critics and the audience. Rotten Tomatoes currently scores it only 39% positive. But the audience rating there is 92%, almost identical to the 91% score on Google reviews. I’m always interested in cases like this. Sometimes, the reason is obvious: the difference in scores on the recent Dr. Fauci documentary is, I suspect, not motivated by artistic concern. 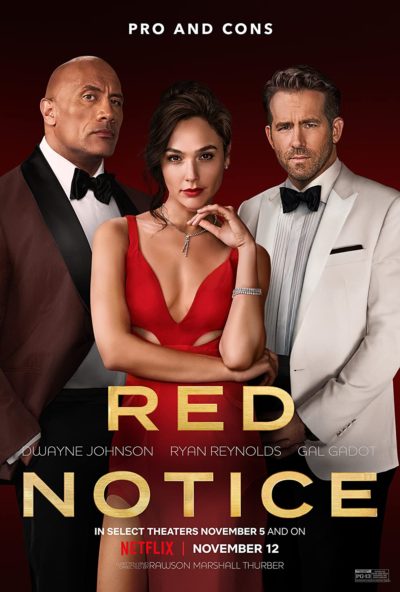 But what did Red Notice do to deserve its critical fate? It has The Rock being The Rock, and Ryan Reynolds cracking wise, while whizzing around the world in pursuit of art thief Gadot, and three decorated eggs supposedly given to Cleopatra by Mark Anthony. That’s about all you need to know, to determine whether you will like this or not. Critical proclamations such as “uses witless exchanges of dialogue to patch together lifeless assemblages of noise and movement passing for action sequences” (a genuine line from an actual review) are unlikely to change your mind.

Thurber may be the biggest director you’ve never heard of. He’s certainly the biggest director I’d never heard of, having made Dodgeball ($168m worldwide), Central Intelligence ($217m) and Skyscraper ($305m). But these are not exactly auteur films where anybody would fawn over the visual style. The last two were basically The Rock doing The Rock things, which makes Thurber the perfect director for this, since it forms part three in that trilogy. Indeed, I suspect he may not exist at all, but was made up, simply to satisfy union rules that movies have to be directed by somebody. For this might have been created entirely by a Netflix algorithm which achieved self-awareness.

However, I’m perfectly fine with that. It was watched on a Saturday night, having just finished work for the week, and I wanted to unwind with something non-challenging and entertaining. This definitely qualifies on both of those metrics, and there’s absolutely nothing wrong with that. In the fraught world we inhabit, empty escapism of a shallow kind such as this, has its place. Watching Reynolds unleash snark at The Rock, e.g. “Lift with your neck,” will never get old – at least, not in the two-hour running time here.

I do have to say, the $200 million budget doesn’t appear particularly on screen. I guess the stars cost a fair bit, but it feels kinda obvious a lot of the “locations” extended no further than an opening shot showcasing a couple of obvious landmarks. Some of the CGI is also surprisingly shoddy, and the plotting is weak, with people showing up exactly as needed by the plot. So, to some extent, I can understand sniffy critical reaction. However, you have to understand what matters in a movie, and it’s not always the same things. You wouldn’t condemn an Ingmar Bergman film for its lack of car-chases, and judged by appropriate standards, this is fine. It may not be an Extraction or even a 6 Underground. But it provided what I wanted, and so I’m not complaining.