This is supposedly the footage recovered after a group of five paranormal investigators went missing. They travelled up to near Loch Ness in the Scottish Highlands, to look into an alleged portal, responsible for everything from cryptid sightings to disappearances. Over the days they spent in the woods near the loch, they were subjected to increasingly odd occurrences, such as inexplicable sounds and mysterious footsteps. One of the group went missing, and after a particularly concerning night, the rest decide to make a rapid retreat. Except, it’s not as easy as that – is it ever? – and they find themselves unable to get out of the forest. 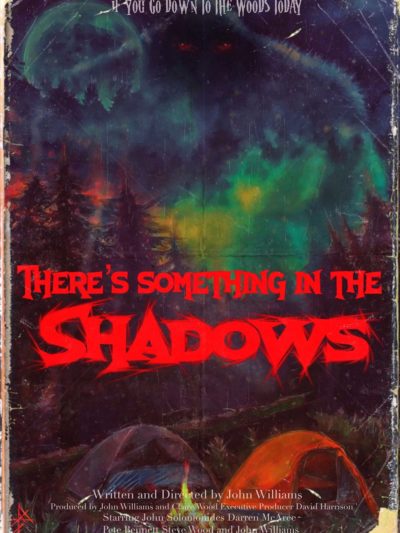 So, before you know it, we have the leader of the group, YouTube presenter Jon Farmer (Solomonides) staring into the lens of a night vision camera, and saying how terribly sorry he is. Yeah, what we have here is basically The McBlair Witch Project. You’ll need to have a high tolerance for the found footage genre, because the first hour of this is basically the five guys chit-chatting among themselves as they travel up to Scotland, and sit around their campfire (top) for a few days. You’ll be forgiven a snort of derision or two, such as the scene discussing whether a robin is a spirit of some kind because it set off their EMF detector. There is not even much sense of location here: one scene shot at Fort Augustus, at the foot of Loch Ness, but thereafter it’s utterly generic woods. Though the midgie-nets the cast wear does certainly suggest the north of Scotland [See also Mark Stirton’s experiences shooting Dark Highlands].

I will say, things do improve somewhat once the more direct shenanigans kick off, though mostly in the sense of being preferable to the near-zero happenings to that point. It’s the usual nonsense of cameras being waved around as people run about. Some of the audio stuff is genuinely spooky in nature; the end credits state the sounds are real audio recordings, made in the Sierra Nevada mountains during the seventies. That may be the most authentic thing this has to offer since, in the typical low-budget cop out, we certainly don’t see anything, except for a pair of glowing green eyes in the darkness.

It just feels like there has been little or no effort put into things before that point. Much of the video footage feels like it was the five actors improvising, with no apparent end-goal specified, and the results of that are rarely effective. If these were the “best” scenes, heaven help what was edited out. I suspect Williams was going for a creeping sense of unease, but there’s not enough meat on the bones to create it: a vague whooping sound (not unlike the mating call of the capercaillie) will hardly strike terror into the hearts of most viewers. It’s not as if I need any more arguments against a camping holiday. The midgies are probably a bigger threat, anyway.