I’m not exactly an opera fan. The nearest I think I’ve come to a live performance were going to a couple of Gilbert and Sullivan performances by the local light operatic troupe, back in my school days. I suspect if you are an enthusiast, you may get a little more out of this than I did. It seems to be… well, not quite based on, but heavily connected to, the Tchaikovsky opera of the same name. Which I had never heard of, so was basically left looking at some very pretty staging for those operatic sequences. I couldn’t even tell you the story of it with much certainty. 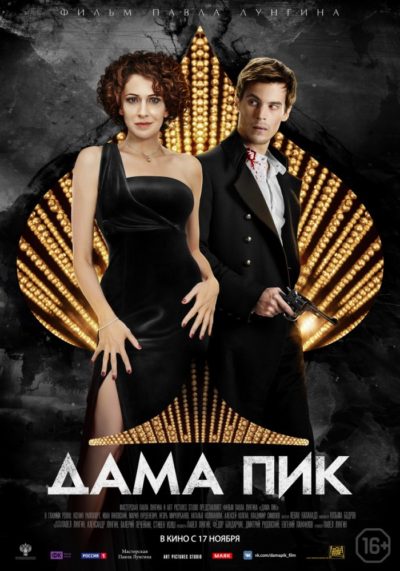 It takes place as a company welcomes back renowned (and a little notorious) diva, Sofia Mayer (Rappoport) to play a role in the opera. Also in the cast is her niece, Lisa (Kurdenevich), and Lisa’s boyfriend, Andrei (Yankovsky), has his eyes on the part of the male lead, Hermann. However, Sofia passed him over, giving the role to the opera’s artistic director, despite his advanced age. This infuriates Andrei, who sets out to prove he deserves the role, by embodying the spirit of Hermann. He was a gambler, and it turns out Sofia has a weakness in that area too. But his increasing closeness to the diva becomes a source of friction with Lisa; it and his gambling also brings Andrei into the company of some rather shady characters.

Some aspects feel like a less supernatural version of Phantom of the Opera, both in the love triangle and with Sofia manipulating those around her in dubious ways, in the belief that the artistic end justifies the means. At two hours, it does feel rather over-stretched, especially towards the end, where it goes into an extended staging of the actual opera. Which, as mentioned earlier and shown top, looks stunning (and the visual side here is generally top-shelf). But it does rob the movie of impetus, just when it should be accelerating towards a climax. Conversely, in terms of tying up the loose ends, it almost feels rushed, though also manages to find time for an extended game of Russian Roulette. Or as I guess it’s known in Russia: roulette. 🙂

None of the three leads perform their own vocals, and this is occasionally obvious. I’d probably rather have seen opera singers trying to act, than actors trying to fake opera singing, especially in the significant quantities of it we see here. The dramatic aspects are good though, with Rappoport providing a solid centre, around which everyone else ends up rotating. I was almost getting a Marquise de Merteuil from Dangerous Liaisons vibe off her character, in the way she manages people for her own benefit, or just her amusement. Obviously, not Rappoport is not quite to the level of Glenn Close, but she’s impressive enough that I found myself looking up what else she had been in, and will check into whether any of those happen to be available.