The copyright status of H.P. Lovecraft’s works is a subject of some controversy, but in the EU, it’s life of the author plus 70 years. Since Lovecraft died in 1937, this makes the Cthulhu Mythos fair game there. Zuccon has taken advantage with a trilogy of movies: The Shunned House, Color From the Dark and this one. Though if it’s any guide, this is just as loose an adaptation as Stuart Gordon’s classic, while apparently also incorporating elements of From Beyond. West (Cerman) is distraught by the death of his young daughter, Eleanor (Bivona) in a car accident, and works tirelessly to create a serum that can bring her back. She does and when she grows up (turning into Rusciano), becomes a successful violinist. 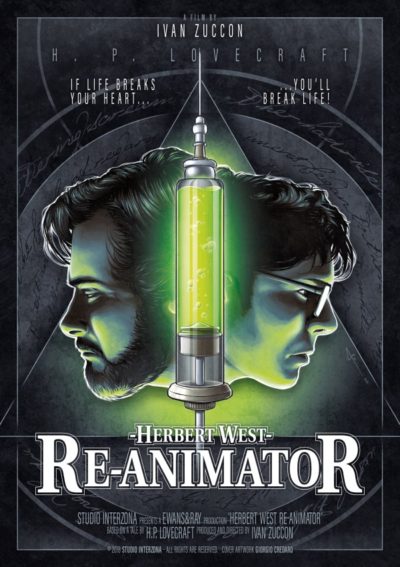 However, she is… changed, and her resurrection appears to open a conduit to The Dark, a mysterious realm of the afterlife in which things (or with the appropriate Lovecraftian capitalization, Things) lurk, intent on coming over to our plane of existence. Eleanor is replaced by one of them, taking the form of Herbert Jr. (Cherubini, looking very much like Jeffrey Combs), and it’s up to Herbert Sr. to go into The Dark and rescue his daughter. The above is considerably more coherent than the film, which is – quite deliberately – fractured and scattered, with coherence not its strong suit. There are also inexplicable elements such as West Sr’s test subjects, who plot to escape when he’s not in the room, then switch to playing dead when they hear him coming back.

It’s definitely a movie where the strong visual style propels the film more than the narrative. The same was true, to a certain extent, of his earlier Wrath of the Crows, but that worked better. I think there were a few reasons: its central performance, from Tiffany Shepis, was better than the one here: Cerman never makes much of an impression. It certainly had a better handle on the story, and was also cut from original cloth. You’re inevitably going to compare this to the Re-Animator, even if the films are on opposite ends of the cinematic spectrum in their approach to the material. That’s an uphill battle for almost any movie.

What stops it from imploding is Zuccon’s strong sense of visual style. In The Dark, there’s a bath-tub, sometimes filled with oily goo, dragged up into the middle of a mountainous landscape, in which Veronica apparently lives. Reading that, it doesn’t sound all that impressive, but it’s one of those cases where the picture at the top is worth more words than I can provide. There’s also some use of jerky editing that is genuinely unsettling. So even if you find yourself floundering in terms of what the hell is going on, this is never boring to look at. I am a firm believer in coherence and the film definitely falls short in that area. Yet, as incomprehensible messes go, this is strangely engaging. Zuccon’s next work is apparently an adaptation of Sheridan Le Fanu’s Carmilla – as pillaged by Hammer – and I must admit, I am curious how that works out.