In a vaguely fascist-looking universe, prisoners guilty of various crimes are locked up in a series of cells, awaiting their fate. Some are executed – but get the privilege of getting to take a fellow inmate with them to death. Some are set free – after a sacrifice of some kind, such as a body part. And some are condemned to live out the rest of their lives in their cell, the worst fate of all. But, it seems, not all the prisoners are who they seem to be; in particular, new arrival Princess (Shepis), who appears to possess extraordinary talents, along with a unique fashion sense. So is this a real jail? And whether or not it is, does it offer any way out for the inmates? 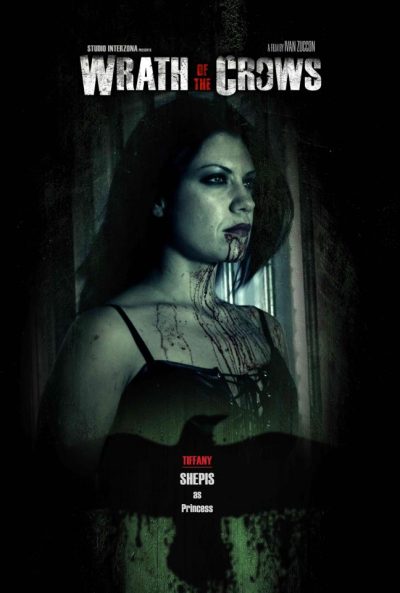 It’s a little hard to say much more without spoilering, though I’m not sure how much that would matter, since I’m uncertain how much that truth was intended to be any kind of “big reveal”. I certainly figured out where this was going, quite some time before the film made it explicit. However, I can’t say it impacted my enjoyment of this very much. It’s still an impressive piece of low-budget cinema, that knows its limitations and mostly turns them into strengths, with the bulk of the film taking place in the claustrophobic single location of the jail cells. Zuccon has an impressive visual style, which manages to be extremely dark without leaving the viewer peering into the blackness, trying to figure out what’s going on.

While certainly not short on the gore, this is a horror film which has a brain as well as a circulatory system, and one which could well stimulate interesting discussions. That’s not something often found in a genre which relies more on the triggering of primal and instinctive reactions than higher intellectual processes (and I say so, with absolutely no derogatory intent). It helps that Zuccon has put together a very solid cast, headlined by Shepis and Rochon, two actresses who are often much better than their material – here, they get the chance to do more, and Shepis in particular is extremely good. She previously worked with Zuccon on NyMpha, and both have apparently made enormous strides over the six years since. It probably helps this actually has a strong and relatively coherent plot, two things you would never say about NyMpha. [Oddly, both have sequences where someone has their tongue cut out. File that one away under “unusual director interests”, based on my admittedly small (2) sample-size of Zuccon works]

It’s certainly out there, in a way that larger productions rarely are, and as such, is a good reminder of what low-budget cinema can do. Rather than seeking to imitate more polished work – if I see another low-budget zombie film, for example, I’ll be shooting myself in the head, thank you very much – Zuccon has used the freedom afforded to go in a different direction. Even if it may not always be entirely successful (like many of its Italian siblings, supernatural elements are used here as a “Get out of jail free” card, in lieu of providing full explanations), it’s still likely more interesting when it fails, then less innovative efforts are when they succeed.