There are some films for which any description is likely inadequate: “You have to see it,” is certainly a cheap cop-out for critical purposes, but I can’t think of many cases where it is more warranted than here. This is a short feature (clocking in a little under an hour), set in a small town populated entirely by animals. Not puppets. Not animation. Actual animals. If you can imagine a live-action version of Zootopia – fortunately, without the heavy-handed moralizing – you’d be in the right area. The animals here do everything from drive vehicles to playing billiards: I’ve no clue how much of this was accomplished, and the truth is, I probably don’t want to know. My guess is, glue appears likely to have been involved, and also that it couldn’t be made in a first-world country under modern standards for animal use in films.

The story concerns a magic wand belonging to a fairy (the original French title translates as “A fairy… like no other“), which is being kept safe by the town’s feline music teacher, Maestro Ericson. But envious eyes are being cast at the wand and the power it contains by a black troll – actually a monkey. He disguises himself as a baker, and bribes one of Maestro Ericson’s pupils, a dog called Charlie, into giving up the tune which opens the wand’s case. Disaster befalls the town, and it’s up to Charlie, Maestro Ericson and a duckling called Per to make their way into the troll’s castle and recover the wand, before any more damage can occur [The version I saw was dubbed into Swedish, which should explain the thoroughly un-French names! I normally avoid dubbed films, but there’s no actual dialogue here – I probably don’t have to point that out! – and it’s all narrated, so the language doesn’t matter much] 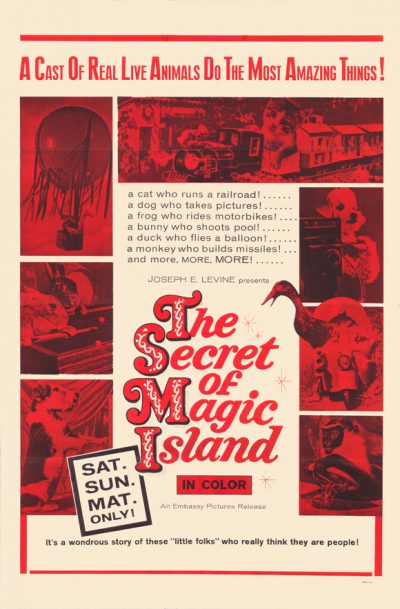 There’s two sections to the film. The first half is mostly a “day in the life of” the town, depicting the various inhabitants as they go about their business, and succeeds in provoking the entire range of emotions from “Aw, isn’t that cute?” to “This is just wrong…” The former would be the kitten getting out of bed in the morning. The latter? Probably the fox giving a beauty treatment to a chicken, which mostly left me wondering how many chickens they went through over the course of production. Then the carnival comes to town, climaxing in a firework display – because we all know how much animals love fireworks! – and we move to the second phase, which depicts the troll’s theft of the wand, and the furry band of brothers’ efforts to get it back.

This probably more successful, because there’s an actual story there, and it also allows Tourane to showcase some genuinely impressive model work. The town after the wand has begun to work its dark magic is devastated, as if it had been hit by a tidal wave, and there’s also a very well-done sequence where our heroes are escaping from the troll through a forest, as he casts fireballs at their vehicle. It’s genuinely impressive, even close to 60 years later. The sets are great, and you may find yourself actually caring about the fate of Per, Charlie and Maestro Ericsson – even if the last-named is so laid-back as to be virtually horizontal, and when it comes to the final assault, “Ericsson decided to stay behind,” according to the narration. The ending makes more sense than some fantasy films I’ve seen, and the whole thing feels more than a little influenced by Jean Cocteau.

Yes, it’s clearly a complete gimmick of a movie, and in that way also reminded me of something like The Terror of Tiny Town, the 1938 Western performed entirely by little people, including not a few former Munchkins. This doesn’t necessarily make it a bad thing: some gimmicks stand the test of time better than others, and in a case like this, you’re dealing with something that is virtually unique, and is highly likely to remain that way. For, while there have been other films starring animals – Disney had a slew of them, such as The Incredible Journey – they’ve all been playing animals. You certainly can’t judge this by anything approaching normal critical standards: “I was unconvinced by the performance of the duckling, in the role of… a duckling.” You can only look at it as a technical accomplishment: does it create a universe allowing the viewer to suspend their disbelief and accept the batshit-crazy premise?

The answer there, is a qualified “Yes.” Some aspects don’t work, even outside some of the more… lethargic animals, shall we say. For instance, the sound effect for mailman’s Gustaf’s truck appears to consist of someone blowing a raspberry, which doesn’t do much to foster the illusion of magical realism. You can argue too, that the first half is little more than extended scene-setting; the black troll is mentioned in the opening voice-over, than barely shows up again for the next 30 minutes. However, there’s enough that does work, and the sheer originality of what you’re seeing kept me engrossed, simply to see what happens next. Plus, I should stress, this was watched on nothing more mind-altering than a glass (admittedly, a large) of Kona Longboard Lager. It may not be something Chris and I ever watch again, yet in an era of increasingly forgettable mainstream cinema, it’s also something we’re not likely to forget anytime soon.

So: you have to see it. And courtesy of the YouTubes, below you can do just that. Closed captions can be enabled, should you desire.