This was one of the first video-cassettes I ever owned, buying my copy for five pounds, ex-rental from the local electronics’ shop (which doubled as a VHS library in Forres). I subsequently watched it with my mother who, to my surprise, appeared to enjoy it. Mind you, she recalls seeing the early Hammer films on their original cinematic release back in the fifties, when she was working in a London bank. If there’s such a thing as a horror gene, it’s from that side of the family I inherited it. 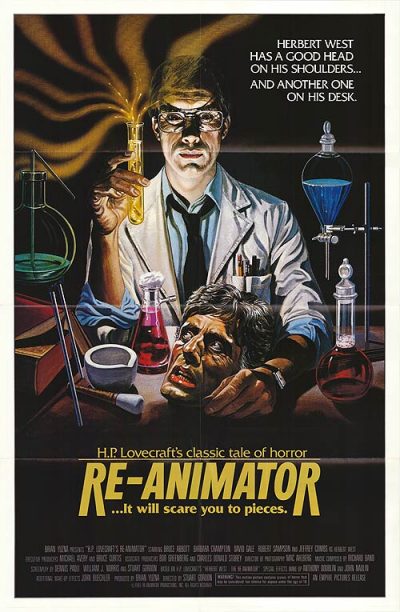 While technically an H.P. Lovecraft adaptation, safe to say this one is rather loose. Some of the basic elements are there, to be fair. In both, Herbert West (Combs) carries out illicit medical experiments, which include re-animating the corpse of the university dean. But this film version both omits some elements – the majority of the original story takes place after West and the narrator finish medical school – and adds others. The narrator becomes West’s fellow student, Dan Cain (Abbott). The movie brings in Megan (Crampton), the dean’s daughter and Cain’s girlfriend, plus lecturer Dr. Carl Hill (Gale), who seeks to steal the credit for West’s re-animating serum.

In spirit, however, it has the intense sense of “wrongness” which permeates much of Lovecraft, along with the sense there are things with which man is not meant to meddle. This is mostly down to the performances of Combs and Gale, who deliver exactly the intensity you’d expect. They use that commitment to sell lines which could easily come off as cheesy in the wrong hands, e.g. “Here you are trysting with a bubble-headed coed. You’re not even a second-rate scientist!” The film is at its best when the two are facing off – even after Gale has literally lost his head, and is carrying it around in a bowling-bag. The film still continues to take itself with the utmost seriousness, which is exactly the way it needs to be.

If ther is a weakness, it’s Abbott as the “hero”. While he provides the eyes through which the film unfolds, it’s not really “his” story, and he’s certainly not the most interesting aspect. There is a nice symmetry in that we first see him refusing to give up on a dead patient, and he ends the film doing exactly the same thing as well. However, there is good reason why virtually every quote on the movie’s IMDb page focuses on West, not Cain, and why Combs has gone on to become a genre icon, while Abbott has…  Well, let’s leave it at “not,” to be kind.

Beyond the performances, you also get excellent use of practical effects, Richard Band’s Psycho-inspired soundtrack, no shortage of gore and what is, as far as I’m aware, the only scene in movie history where a severed head performs oral sex on a woman. Astonishing to think this actually received a significant theatrical release. B-movies really don’t get much more B-, or much better.