/crosses Croatia off the list of “places from which I’ve seen a horror film.” This one is perhaps a slight cheat, running a brisk 49 minutes. However, I welcome the chance to play catch-up: if I can watch and write my review inside an hour and a half, I’m calling that a win.

We start with a group of perverted teachers, who all received an email invite to an orgy in an abandoned school building. After they show up, it’s not long before they start being slaughtered by the titular heroine (Salata). She’s a vengeful student, who is aggrieved at having been failed after refusing to play the required game of trading sexual favours for grades. She sent out the invitations, and is now taking her vengeance, enthusiastically, with a samurai sword. And, for reasons, no-one ever explains, is on roller-skates. Which would probably have been a much better idea, if it weren’t for the amount of stairs in the building. 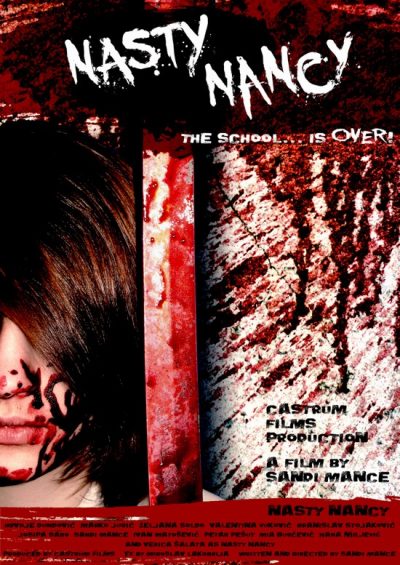 A good chunk of the above doesn’t become clear until later on, and early on, the struggle to get out of the gates is real; the first ten minutes left me wondering if this should be tried for crimes against cinema. It eventually picks up – when it stops apparently taking itself seriously. The makers throw in sound effects stolen from Kill Bill and Warner Bros cartoons to good effect, as well as Japanese captions yelling things like CHIIIICK FIGHT!!! at occasional intervals. It’s the kind of loopy inventiveness (and gleeful disregard for copyright) which help overcome glaring technical weaknesses, such as certain scenes apparently having been lit with a box of damp matches. Simply listing all of those would allow me to fill this out to the 500-word goal, without further critical analysis needed.

The movie bounces back and forth between Nancy picking off the teachers one by one, and flashbacks to school – the latter are considerably less interesting, not least because the sleazy intent is not matched by any actual nudity. Mance apparently couldn’t convince any of the friends who populate this to get naked, so as grindhouse goes… this doesn’t. The gore effects are there, although are about the level you’d expect from an amateur production. For example: Nancy waving her sword at the camera. Cut to shot of victim letting a mix of sausages and food-dyed Karo syrup fall out of a hole in his T-shirt.

Still, it just about sustains interest, even if the short running time is wise. I particularly have to applaud the scene where one of her victims gets his dick chopped off (shown, top), then picks it up and uses it as a weapon, bludgeoning Nancy with his own severed penis. That’s… Well, not something you get to witness every day, and you can’t complain too much about a film containing a moment you never imagined you might see. If for no other reason, I will remember this one, and as a result, that puts it above the bulk of such fan fictions.