I watched this in the hopes it might live up to the sentence in the synopsis which said, “When ISIS terrorists begin to sneak across the US Border into Arizona, Branson alerts the Shadow Wolves to track and stop them.” Hey! Local interest! Unfortunately, based on the end credits and its “Utah unit,” looks like they couldn’t even get that right. Certainly, the rest of the movie has little of interest, largely being generic good guys vs. terrorists nonsense. It was apparently made as a pilot for a TV series, and that it couldn’t even clear such a low bar tells you all you need to know. The Shadow Wolves are a real thing, however. They are a largely native American group within ICE, who use traditional hunting skills to help secure the border in Arizona. 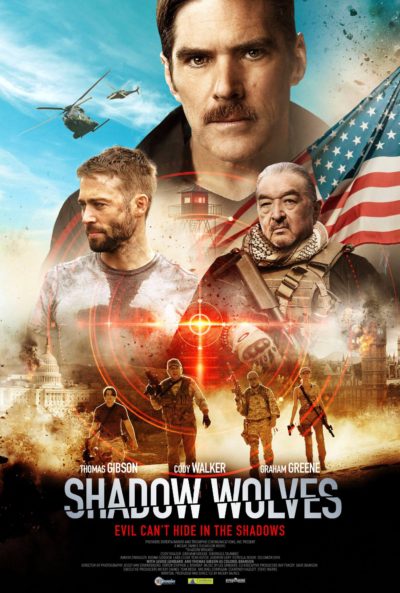 Here, they seem a little more… unfocused, shall we say, operating under the overall control of Colonel Branson (Gibson), and under the direct guidance of Nabahe (Greene, providing what little gravitas the film possesses). But the film throws in an alphabet soup of characters from all over the place, such as NSA agent Eric Shaw (Walker), and a whole bunch of MI-6 operatives, who are there to hunt down terrorist Khan [Yeah, we made all the obvious Star Trek II jokes, trust me on that]. He has a grudge against America in general, and Nabahe in particular, so is planning to smuggle a dirty bomb across the border, with the help of the Mexican cartel, to get his revenge.

It’s just way too much for a single movie to handle, and even as a pilot, needs to be considerably simplified in order to work. The concept is strong enough, and I did like the way the Native American aspect wasn’t particularly foregrounded – the Shadow Wolves were just doing their job, like anyone else. Well, except for a cringeworthy scene when Shaw arrives, where he is proclaimed to be a member of the “Wannabe” tribe. Oh, hold my aching sides, for I fear they may split. But outside of Nabahe, the various characters are given little to make them memorable, or even distinguishable, beyond their hair-cuts.

The action is equally generic, large amounts of automatic weaponry being sprayed around to little effect. Mind you, this is probably preferable to the fist-fight between Nabahe and Khan at the end, after the bad guy kidnaps our hero’s wife. I mean, Greene was born in 1952. You do the math, and figure out how credible this was. Oh, yeah: Khan is attempting to blow up… a casino. For a film which is trying so hard to check all the diversity boxes, it’s difficult to get much more cliched in terms of Native American culture than that. Inevitably, it leaves things open for the intended series that never happened. To be honest, I think Arizona dodged a bullet with this one. We’ll pass, and Utah can have it.