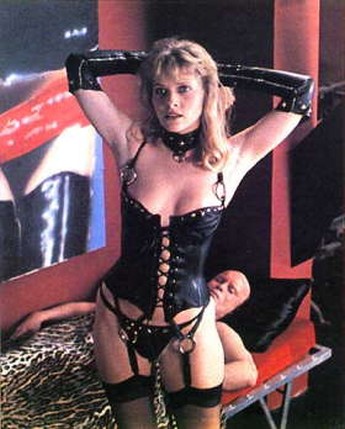 Three of the stars and the director of Re-Animator reunited for another stab (or bloody hack) at H.P.Lovecraft, once again playing fast and loose with the plot. The results this time are more uneven – the best moments are perhaps better, yet they stand out largely because there are moments of definite slack. Combs is, yet again, the epitome of the mad scientist, left in the care of psychologist Crampton after a nasty accident involving the head of his boss, Dr. Praetorius (Sorel). This leads to creatures from neighbouring dimensions, buckets of slime and Crampton – part of a long tradition of utterly unconvincing female scientists, stretching back to Raquel Welch in Fantastic Voyage – getting to wear S/M gear (right).

How Combs kept a straight face delivering some of the dialogue, I’ll never know, but full credit to him for stopping this collapsing into parody. That’s a distinct possibility for much of the film, especially when people start sprouting phallic appendages from their foreheads, yet Combs’ dead-serious attitude keeps things in line. The effects are generally not bad, and the film as a whole is schlocky and fun, in a way that disappoints only if you were expecting another Re-Animator. I do have to wonder where Crampton’s character gets a ready-primed bomb in the middle of the night. Detonators R Us, perhaps?