There has been a trend of late to have stunt co-ordinators direct films. John Wick opened the door, with Chad Stahelski, and its success helped uncredited co-director David Leitch get Atomic Blonde. Now Hargrave, a stunt co-ordinator on Blonde, gets given $65 million by Netflix, and sent off to Bangladesh, where mayhem is cheap. Well, for Bangladesh, it’s mostly India or Thailand standing in, where mayhem is almost as cheap. The results are about what you’d expect: a slew of highly impressive action, which falters on the dramatic level. Still, you want great emotional depth, you’re not hiring Hemsworth, are you? 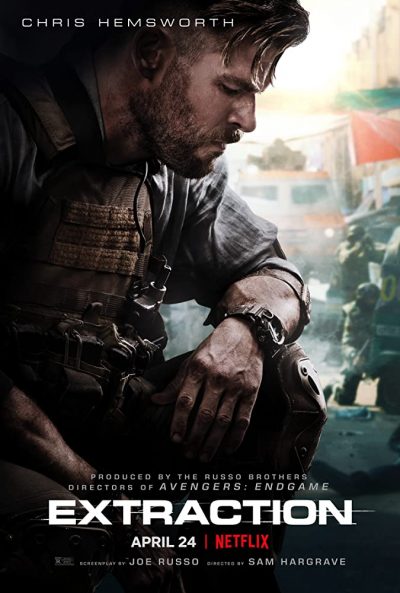 He plays the oddly-named Tyler Rake, a mercenary with issues. The operative is hired to free Ovi (Jaiswal), the son of an Indian crime-lord, from kidnapping by a rival. That succeeds, but Tyler and his team get stiffed on the payment before they can escape the city. His partner, Nik (Farahani), suggest dumping Ovi and bailing. But remember those issues I mentioned? Turns out Tyler had a son, whom he lost. And he’s damned if he’s going to lose Ovi. In the end, he teams up with Saju Rav (Hooda), the very same person who scammed him, to get Ovi to safety.

At the risk of stating the obvious, you’ll like this if you like this sort of thing. By which I mean, the hard-hitting John Wick style of action, which employs long, unbroken shots to showcase things, rather than the rapid-fire editing style regularly used by, say, Michael Bay. Personally, I’m a big fan of the former, and this has some great examples. Most obvious is the 12-minute “single take” – quotes there advisedly, since it’s actually spliced together, more or less seamlessly – in which Tyler and Ovi try to escape their pursuers. Gun-battles, fist fights, high falls and not one, but two car chases are included. If it reminds you of a similar scene in Atomic Blonde, it should: Hargrave helped choreograph that.

It’s certainly not perfect. Tyler proves so indestructible it’s amusing, while at the end, Saju Rav is such a bad-ass, you wonder why he simply didn’t rescue Ovi himself. The efforts at giving the hero motivation are so token, you wonder why they bothered. If you’re the kind of sensitive flower bothered about “white saviour” films, you should probably give this a wide berth – as if that weren’t already clear. And some citizens of Dhaka are apparently upset over the way their fine city is portrayed here. Interestingly, the graphic novel on which this is based, was originally set in Paraguay, though to be honest, they could have thrown a dart at a map to pick the sepia-tinted location.

For the rest of us though, this is a high-energy blast of kinetic energy, which cinematically, is as close as you’ll get to playing a really well-rendered first-person shooter. Empty, meaningless adrenaline rushes don’t come much better than this, and I say, more power to the stunt co-ordinators of this world.