When is a Hammer film, not a Hammer film? It’s a legitimate question here, for despite being released on a double-bill with The Curse of the Werewolf, the Hammer name does not appear anywhere in the credits. Instead, the feature is listed as being produced by “B.H.P. Films”, and some sources flat-out state it was “not a Hammer movie”. B.H.P. was named after the initials of its founders, George Baxt (the writer here), agent Richard Hatton (who had Hammer’s Michael Carreras as a client) and producer Jon Pennington. Another source writes, “In the early 1960s, the ACTT (Association of Cinematograph Television and Allied Technicians) agreed to sponsor some of their own films in light of a slump in British productions. B.H.P Films was one of the companies formed to take advantage of this. In a goodwill gesture, Hammer agreed to supply studio sets and personnel for a nominal fee.”

So is it Hammer or not? Well, if it’s good enough for Wikipedia, it’s good enough for me. Regardless of the label on the tin, all but one of the credited cast and many of the crew had worked or would go on to work for Hammer. So if it’s not a “true” product of the company, it’s a convincing facsimile. Interestingly, it is likely the closest they would come to an Edgar Allen Poe tale. That seam was being successfully and profitably mined in the United States during the sixties by Roger Corman and AIP, using Vincent Price. Perhaps there was a gentlemen’s agreement for Hammer to stay away, despite Poe being public domain? But this certainly has echoes of his story, The Black Cat, and opens with a woman, Ella Venable, reading aloud from arguably Poe’s most-famous work, The Raven. 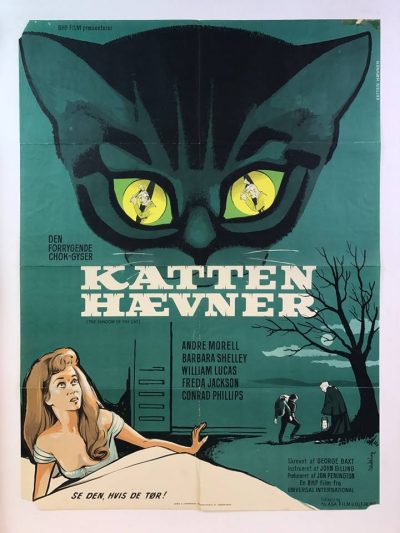 She doesn’t last long though, being brutally bludgeoned to death. And, literally, it’s the oldest cliche of whodunnits, for the butler did it. He and the housekeeper turn out to be operating on behalf of Ella’s husband, Walter (Morell, going from dogs in The Hound of the Baskervilles to cats!). He has hatched a plan by which he will knock off his rich wife, and use a dodgy will to claim an inheritance which would otherwise have all gone to Ella’s favourite niece, Beth (Shelley). With Ella buried in the nearby woods, all they need do is find that original will, which would be a major problem if it were to turn up. The only witness is Tabitha, Ella’s beloved cat (played by Bunty, who was borrowed from the landlady of a Windsor pub!), and what threat can a vengeful moggie possibly pose? The answer, it turns out, is more than you’d think.

It’s not long before those involved start having “accidents”, and disposing of the cat becomes as high a priority as locating the will. Of course, it’s a silly idea – not least the idea of a cat giving a damn enough to take revenge on its owner’s murderers. A dog, sure. But a cat would be more likely to go, “We need to discuss staffing arrangements going forward,” and begin rubbing itself on the legs of whoever happens to be nearest the tin-opener. That said, Gilling does a surprisingly impressive job of selling the scenario. Oh, it does require significant foreshadowing, to be sure. As soon as the swamps in the nearby woods are mentioned, you just know that someone will be falling into quicksand. The same goes for the treacherous attic floorboards. At least there’s only one of the cliched “cat attack” moments, where Tabby – apparently with the aid of a small electric shock! – pounces onto her target.

In the original script by Baxt, the cat did not exist as a physical entity: it was intended to be symbolic, a representation of the collective guilt of the participants. Gilling, apparently, was not standing for any of this metaphorical bullshit, and made it an actual feline. This comes complete with scenes shot in Cat-o-Vision, which had me wondering if my copy of the film was wonky, the first time Tabitha’s perspective showed up. It’s not obvious, being just slightly distorted. But you can’t help cheer Tabitha on, as she relentlessly outsmarts her human opponents, luring them to their doom. Not that these particularly criminals take much out-smarting, with poor decisions almost inevitably playing a role in their departures. The cops aren’t much better: they end up having to be literally led to the victim’s body by Tabitha. 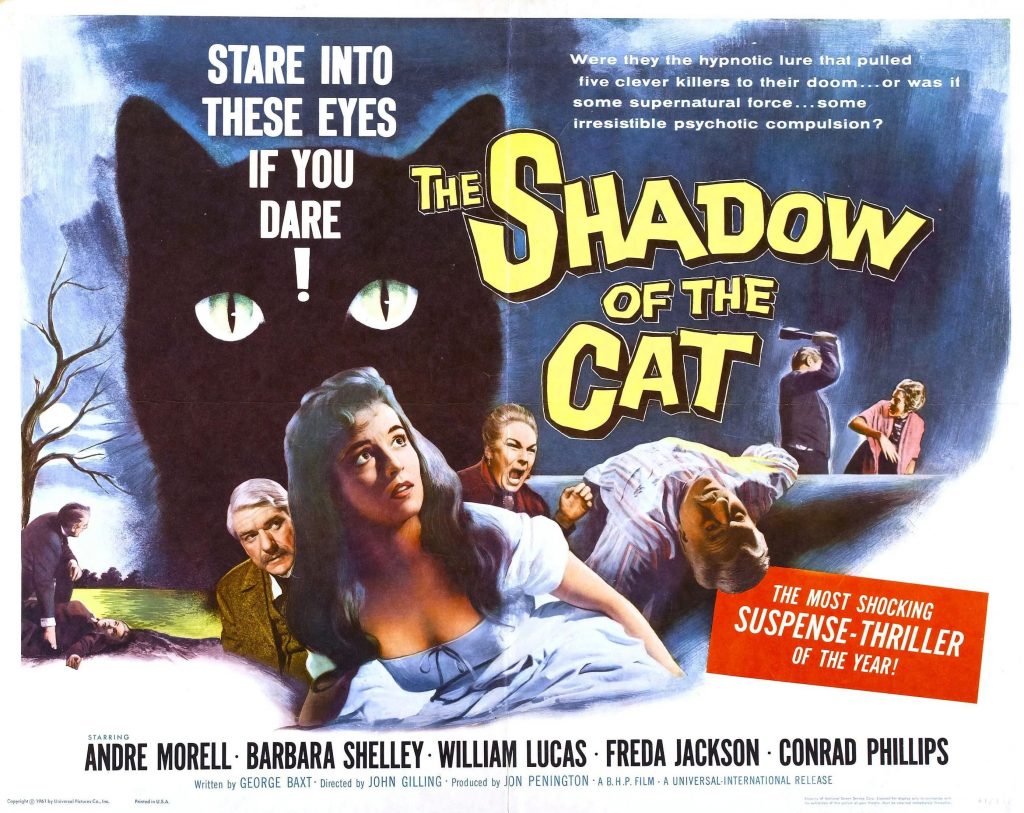 Beth, along with newspaper writer Michael Latimer (Phillips), fare slightly better and are the closest to a human heart the film has to offer. The former is always on the side of Tabitha, and is (rightly) appalled at the attitude of the villains towards the animal, even if the cat proves to be far from defenseless. I was watching this with one of ours perched on the arm of the chair beside me, and I can only hope she wasn’t taking notes. Coincidentally, she is also called Tabby, even though she isn’t one. This is because we couldn’t come up with a name for her, and so I joked we should call her “Tabby Announced”. The name stuck. Still, it doesn’t really matter what you name your cat. It’s not as if they listen when you call them..

Being a cat person, I enjoyed this – likely, more than expected when I read the synopsis. At less than eighty minutes, it can’t afford to hang about, and Gilling generally keeps things moving forward and interesting. I will confess, I was hoping for a happier ending, with Beth taking Tabby away to a forever home – if any cat deserved a large saucer of cream, it’s this one. Instead, she sells the house and leaves the cat behind for the new owners to deal with. Bitch. Still, if they remade this today, they could name it after a certain Netflix documentary, and called the movie Don’t F**k With Cats.