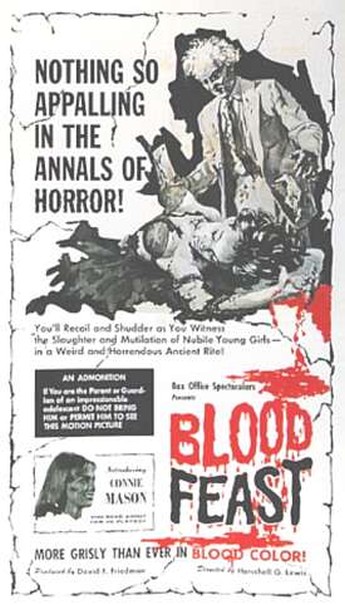 This may be the first ‘splatter’ movie, with the bloody setpieces the main reason for its existence, designed to lure people to the drive-in. One can only imagine its effect on the audience at the time of release in 1963: though it seems almost inept by today’s standards, it still took 38 years to get an official British release and even that was cut (albeit in a whipping scene rather than for the gore). The effects are enthusiastically amateur: the ‘tongue’ supposedly pulled out of a victim is so large, it’d need to have curled up like a butterfly’s to fit her head. Even then, it would still likely have occupied most of her frontal lobes.

The excuse for this is mad Egyptian caterer Fuad Ramses (Arnold), and his plot to revive the goddess Ishtar. Young ladies who order his catchily-titled book, Ancient Weird Religious Rites, are killed and dismembered – he gets away with this because the Miami Police Department consists of one car and four men. Shot in two days, this was a sensation and, much like Night of the Living Dead, deserves respect even though this kind of thing has been done much better since. Quality-wise, it matches Ed Wood’s more professional work i.e. woefully deficient in just about every way, not least the painfully amateur soundtrack. Anyone able to restrain from frequent sarcasm is better than us. But that’s half the fun; no, make that 95% of the fun, since its value now is almost entirely as schlock. Only Arnold’s performance has survived the passage of time, seeming post-ironic and knowing in its excesses. Unjustly overlooked at the 1963 Oscars, I’d say…