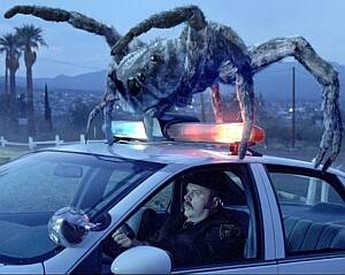 You know just what to expect when a barrel of toxic waste plunges into a pond, near a sign pointing to the local exotic spider farm. Yet it’s hard to tell whether this is supposed to be a parody or not; elements (not least the giant spiders terrorising a small Arizona town) seem to be played with enough gleeful exuberance to suggest so, but the cast with fewer than eight legs are so two-dimensional as to make you wonder whether they are the CGI effects. Arquette makes little impression as the local mine owner, and Wuhrer scarcely more as the sheriff; her son is irritating, though this is par for the course in such things.

The characters seem to exist purely to stick limbs and/or heads into dark, enclosed spaces – the film only comes to life when the aracs attack, and the saving grace is, that’s a lot of the time. We watch them being dispatched by gun, cross-bow, chainsaw and exploding tanker, and wonder whether spiders really do make those kinds of noises; I’m almost certain I heard one squeak “Yippee!” before sailing down a guy-line. It’s all deeply dumb, enormously predictable and, going by the whimpering from the row behind, liable to traumatise young children for at least a decade. Who could ask for any more?