If ever there were a film that does the bare minimum, this would be it. Okay, there are bees in the movie. They do kill people – albeit not immediately, their stings prove fatal a couple of hours later (though the impact there is largely limited to the victim thrashing about and begging to be shot). However, the invasion in question is actually from the human side. For you have your generic group of mercenaries, landing on the ‘Island of Death’ [right there, probably a clue you should find another job] to carry out a rescue mission after a scientific lab on the island, led by Professor Larl (Warwick Gilles), went dark. We know from the prologue – though the mercs are apparently in the dark – that 70 years previously, another expedition was wiped out by killer bees. The local tribe summoned these, to punish the scientists for trying to take a sacred relic, the Giant Bee Amber. 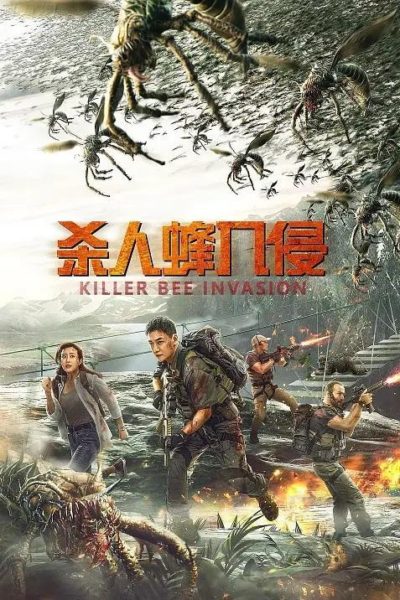 This time, Captain Qin Tian (Zhang) is tasked with bringing back lead scientist Dr. Tang Ling-Fei (Yu), along with the N17 compound on which she was working, which could be the key to extending human longevity. Hey, what could possibly go wrong with trying to extract DNA from an insect embedded in ancient amber, and using it for genetic splicing? Well, give yourself two points if you answered, “You end up being chased round a remote island by a pack of rottweilers.” Because, in an unusual twist, that’s what happens for the bulk of this movie. The bees, despite the title, are largely relegated to playing a second-level threat, though naturally. we do still get a scene of the mercenary squad unleashing their automatic weapons at them. That shit never gets old.

It seems as if the director had an encyclopedic knowledge of American action movies, and wanted to cram in as many tributes as possible. As well as Jurassic Park, you’ll notices bits taken from Predator, and what feels like a whole heap of Aliens, such as the couple of mercs who hold hands over a grenade rather than succumb to the monstrous threat. There’s nothing like the same level of characterization present though. About as far as we get is a woman who wields a bow rather than a firearm, and the token Western guy (Diego Dati) who inevitably dies quite quickly.

It’s all disappointingly low-key, without any sequences which stick in the mind, or even any particularly silly moments. This is a merely functional entity, as if the makers had been presented with a bulleted list of elements to be included, and created the cinematic shortest line between them. All the requisite marks are hit, with no innovation or style, including the inevitable final shot of a bee leaving the island, which hints at Killer Bee Invasion 2. Though that seems more a threat than a promise, after what feels like a killer bee movie designed by a standing committee.