I am contractually obliged to appreciate at least somewhat, any film made here in Arizona. This certainly fits the bill, having been shot at places like the Pioneer Living History Museum, Sitgreaves National Forest and Winters Film Group Studio. However, it is a fairly basic tale of two-pronged revenge, with significant pacing issues. The proceedings only come to life in the last 20 minutes – and barely that. Initially, matters are more than a tad confusing, as we jump about in time and space without apparent notification. But the basic principal is eventually established. 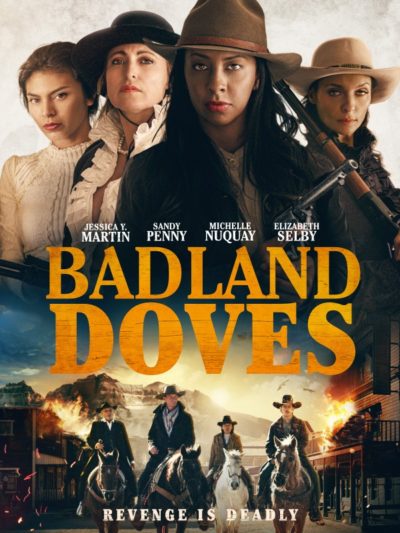 Revenger #1 is Regina Silva (Martin), whose family were killed by masked intruders. Following that, she got shooting lessons from a conveniently passing gunslinger, and set out to find those responsible, working as a saloon prostitute because it was apparently the best way to find them. Yeah. About that… Anyway, Revenger #2 is Victoria Bonham (Penny), who just so happens to be the madam of a brothel, also seeking justice after one of her girls was murdered. Coincidentally, Regina shows up, and they eventually discover they are both looking for the same person, Pete Chalmers (Johnston). However, his father (Greenfield) wields so much power in the town, his son is basically untouchable. Victoria wants to leverage legal means against Pete, while Regina prefers more direct action, and isn’t willing to wait around forever, while the wheels of the law grind slowly away.

If you were to summarize my reactions to this, the first ten minutes would be “What is going on?”. The next twenty would likely be, “Ah, ok. I know where this is heading.” After that, we get about half an hour of, “Is anything else of significance going to happen?”, then twenty of moderate satisfaction, as Chalmers and his forces go to battle with Regina and her allies. However, the action here is underwhelming, not least because it appears the bad guys have all the shooting skills of Star Wars stormtroopers, unable to hit stationary targets from about ten paces, in broad daylight (as shown, top). Pete is an underwhelming villain too: beyond “alcohol’s to blame,” it’s never particularly established why he attacked Regina’s family or killed Victoria’s employee. Motivation: it’s vastly over-rated, apparently.

The last five minutes do offer at least something unexpected, in terms of the mechanism by which revenge is achieved. It’s about the only novel angle the film has to offer, and you sense this is one of those cases where having the same person writing, editing and directing proved problematic. I’m not convinced the story can handle the two-pronged approach, with the script leaving both threads feeling in need of development.The dual female leads aren’t bad, though I was distracted by Penny’s accent, which sounds more Antipodean than Arizona. To be fair, it’s really not any worse than Bad Girls, the far larger budgeted “whores out for revenge” film. However, that is not exactly a high bar to clear. For passion projects like this, I have no problem forgiving budgetary restrictions, and to be fair, this looks and sounds decent. The plodding and meandering script, however, is much harder to see past.