I love a good conspiracy theory, mostly for entertainment purposes. In that light, the infamous Pizzagate conspiracy has to rank highly, with its saga of high-ranking politicians linked to a child-sex trafficking ring, run out of the basement of a Washington, D.C. pizza restaurant. Too ludicrous for words, yet it gained more traction than it deserved (which would be, not at all). But what interests me is its adjacence to reality: the Jeffrey Epstein case shows that child-sex trafficking for the rich and powerful is by no means impossible. I’ve a suspicion certain conspiracy theories may be deliberately created, ludicrous exaggerations designed to discredit reports of actual conspiracies by association. 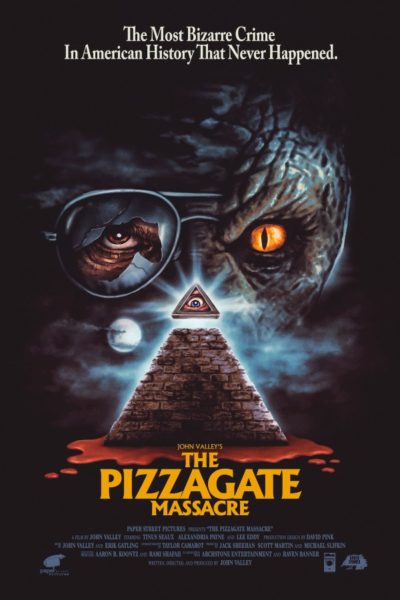 In which case, Valley’s movie (changed from the far less confrontational – and, let’s be honest, marketable – original name) may be more part of the problem. It’s the story of Duncan (Seaux), a militia activist and fan of talk-show host Terri Lee (Eddy), yet who doesn’t buy wholesale into the mythology, such as her reports about lizard people eating children in the basement of Austin, Texas’s Tootz Pizza (slogan: “Seeing is believing”). Lizard people, sure. But the place doesn’t have a basement. Still, when journalist Karen Black (Payne) asks him to go along as she digs into the allegations, he agrees – largely to keep her away from a far more dangerous alternative option, the volatile and violent Philip (Valley). But the mission spins out of control, Duncan eventually becoming – or least, being depicted in the media as – the lunatic fringe he sees in Philip.

To the film’s credit, this is more nuanced than I expected, with Duncan a relatively sympathetic figure – at least, in comparison to Terri Lee and Philip. While far from innocent (the tattoo emblazoned across his chest makes it hard to be particularly sorry for him), he’s a victim of circumstance and manipulation as much as anything. Yet Valley doesn’t bother to take his idea to the logical conclusion. For “alternative media” like Terri Lee can only thrive when the traditional media has lost any credibility – as it has, mostly for very good reason, due to their relentless promotion of narratives over fact. Though not necessarily for any sinister motivation beyond chasing ratings, I should add; an area in which they are indistinguishable from their alternative brethren.

Despite, or perhaps because of, it being less heavy-handed than the new title suggests, it is hard to figure out who the target audience is. There’s no doubt Valley is anti-Pizzagate, but I’m not sure of the intended message, beyond that. The film comes over as a bit of a well-intentioned mess, which begins by appearing to be Karen’s story, only for her to all but vanish from the narrative after their arrival at Tootz Pizza. Something like this should probably leave the viewer feeling angry, yet the movie never succeeded in generating much emotion at all in me. I’d probably rather have hated this, than had no real reaction.