Following up on our look at Wolf Warrior 2, thought I’d check in on this year’s $500-million blockbuster you’ve never heard of. For Operation Red Sea is currently the 7th-biggest movie of the year worldwide, having taken $189 million or thereabouts more than Solo: A Star Wars Story. As with WW2, this was almost exclusively (all but about $3 million here) due to its success in China. And that’s far from the only similarity. Indeed, so close are the two films to each other, this might make Red Sea the first mockbuster with a $70 million budget. 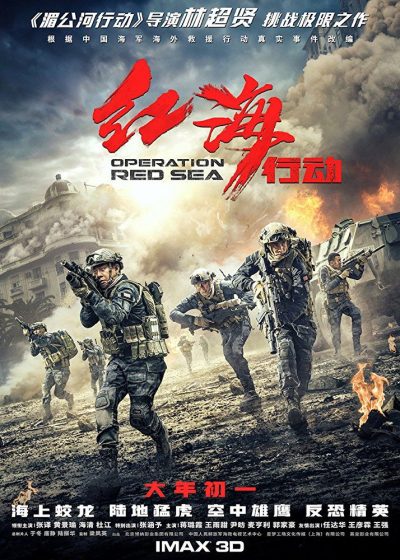 For it has an identical basic premise: Chinese special forces are sent to a third-world country in turmoil, in order to rescue their citizens from (cue thinly disguised xenophobia) the local savages, despite overwhelming odds. That alone would be unusual, but Red Sea shamelessly copies the opening of WW2, which has the heroes fending off an attack by Somali pirates. And both films also share a major set-piece sequence involving a tank battle. Considering I have seen precisely… two examples of such tank-fu in the past decade, and they were in these two movies, I’m viewing any claims of “just a coincidence” with deep scepticism.

The main difference is, WW2 made only a token effort at characterization. Red Sea completely abandons any interest in characterization whatsoever. It may be hardly less xenophobic than the movie, to say all Chinese people look alike. But fuck me, when you dress all your actors in fatigues, give everyone Army buzzcuts and then rub them in dirt, the viewer needs some distinguishing marks of personality. The movie is almost entirely unbothered by such things. There’s one woman on the team (to the movie’s credit, it is less Neanderthal than WW2 in the area of gender equality), and a guy who eats candy. Seriously, that’s about as far as we go, in terms of identifiable traits.

Lam fills in the gaps – at 139 minutes, there’s a lot to fill – with close to non-stop violence, and with two decades of directorial experience in the field, he’s good at it. The finale sees eight soldiers storming a courtyard held by 150 insurgents, though for me the most memorable sequence was an extraordinary bloody and brutal attack on a convoy, which starts with mortars and escalates from there. It’s so savage, it caused the Variety reviewer to call it, “war propaganda that comes off as antiwar.” Make no mistake, this is nationalist propaganda of a direct kind. Per Wikipedia, it was “the highlight film presented to audiences as a gift for the 90th anniversary of the founding of the Chinese People’s Liberation Army, as well as the party’s 19th National Congress.” You won’t get that official stamp of approval lightly.

If you can set any qualms about this aside, it’s an undeniably well-crafted piece of action cinema. Yet it’s startlingly soulless and empty, and often feels more like you are watching scenes from a video game. I felt absolutely no connection to any of the characters, so their peril, injury or death made absolutely no impact on me. For its flaws, Wolf Warrior 2 did appear to involve people, and that’s probably why it’s the superior movie.