In which Dyanne Thorne’s iconic Ilsa character moves to the UK after the war, and opens a holiday camp of a very “special” kind. Hilarity ensues. Co-starring Sid James and Barbara Windsor.

Sadly, that is not quite the case, though I am tempted to start a website containing entirely erroneous reviews of movies such as the above, just to fuck with people. Instead, this slight B-feature (which even at 61 minutes, proves not quite slight enough), is a pseudo-werewolf story. Someone is ripping up people in a London park, and heiress Phyllis Allenby (Lockhart), who lives in a mansion nearby, has a horrible feeling it’s her. She has nightmares, wakes up to find her hands bloodied (above) and slippers muddied, and is a firm believer in the Allenby Curse, which has haunted her family for generations. 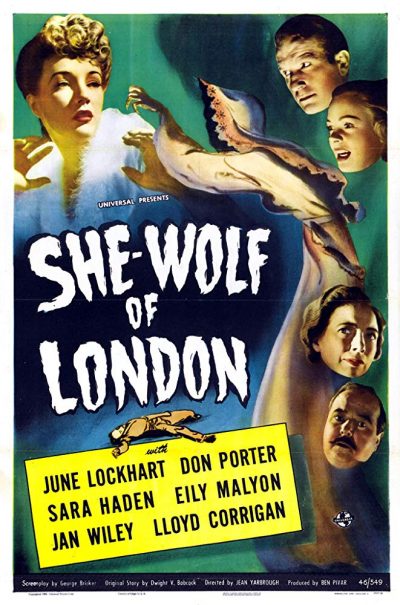 Unconvinced are her fiance, Barry Lanfield (Porter), as well as her aunt Martha (Haden), who runs the household and her cousin, Carol (Wiley). They’re wise to be doubtful, because the reality turns out to be closer to a plot from Scooby-Doo – though as things unfold here, it turns out to be more of a Scooby-Don’t. The climax ends up relying on a) the perpetrator explaining themselves in great detail to the victim, while b) someone is conveniently lurking nearby, to overhear them incriminating themselves, and c) the villain turning into a Dalek, inexplicably losing the ability to negotiate stairs.

It’s clear Yarbrough was attempting to go for a Cat People-like vibe, playing up the angle of whether or not his heroine is a murderous shape-shifter, or just a neurotic chick, obsessed with the past. But as you’d expect from a director whose horror output went from The Devil Bat to Hillbillys in a Haunted House, he does not have the necessary subtlety of touch necessary for this to work, possessed by the likes of Val Lewton. The attempt to create “London” with an all-American cast, barely attempting to hide their accents, is more of a token gesture, not extending to much beyond industrial volumes of studio fog and a couple of bobbies’ uniforms.

Part of the problem is likely that, given the title, expectations are rather skewed from reality, even if you’re not expecting a busty blonde in black leather, going round yelling about “Ze glory of ze Tird Rike” [Just me, then…] This feels like it should sit along other Universal monster movies of the decade, like Frankenstein Meets the Wolf Man. Except there are almost no horror elements at all in this low-key thriller. In everything but fringe trappings, it’s closer to the “quota quickies” Alfred Hitchcock was popping out before the war.

Lockhart, who’d go on to be not one, but two iconic sixties TV moms, in Lassie and Lost in Space, brings a certain sympathetic likeability to her character. This in sharp contrast particularly to the large helping of vanilla blandness provided by Porter. Even if you know there’ll be no shocks and precious little tensions, this is still likely to come in significantly below any satisfactory level of whelm.