Pop quiz. Which of these four movies took most at the global box-office?
a) Guardians of the Galaxy
b) Star Wars: Episode III – Revenge of the Sith
c) Wolf Warrior 2
d) Wonder Woman 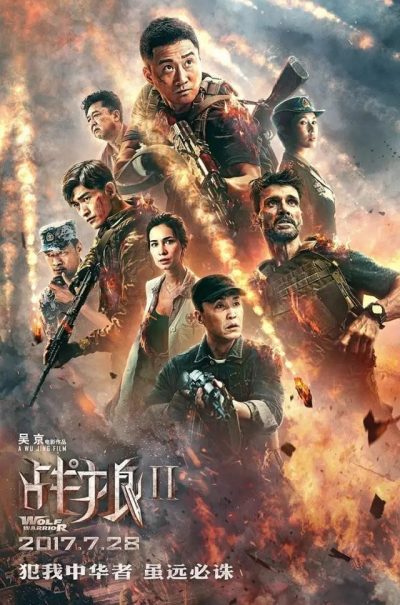 The answer is c), because the key word in the question is “global”. Wolf Warrior 2 brought in over $870 million worldwide, making it the biggest blockbuster you’ve (probably) never heard of. 98.2% of that take came in one country: China, with the entire rest of the world, including North America and the UK, worth only $16 million or so. This remarkable success was a surprise: released in 2015, Wolf Warrior scored a respectable, yet hardly staggering, $82.4 million – not exactly priming the pump for its sequel to gross more than ten times as much.

While part two was helped by being released in the summer blackout period, when foreign films can’t be released, it was up against The Founding of an Army, a Government-backed film, and the smart money was on that to come out on top. Instead, it took just two days for Wolf Warriors 2 to surpass its predecessor at the box-office, and ten more to become the biggest Chinese-made film of all time, overtaking Stephen Chow’s The Mermaid (another half-billion dollar movie largely unseen outside its home country). Even though the budget had been multiplied six-fold to $30 million, investors earned a handsome return.

But what is it like as a movie, in particular for an audience beyond the one for which it was made? It’s surprisingly straightforward and simple, feeling like a throwback to eighties actioners starring the likes of Jackie Chan; not least, because of the out-takes which run behind the end credits (though considerably less bone-crunching than Jackie’s!). Want the plot, in ten words or less? Chinese good guy takes on evil gwailos. Certainly, you don’t need to have seen the original: although there are some references back to it, mostly revolving around a dead/missing girlfriend/wife/whatever, I can’t say not knowing who she was made any difference.

The action begins with special ops soldier Leng Feng (Wu) getting sent to prison for homicide of the fairly justifiable kind, as he returns the ashes of a dead colleague to his family. On release, he gets a job as mercenary security for a freighter on the East African trade routes. While on shore leave, Leng gets stuck in the middle of an attempted coup, with muscle provided by imported European mercs under the command of Big Daddy (Grillo – thirty years ago, it would probably have been Richard Norton). And wouldn’t you know it, turns out they had something to do with Leng’s dead/missing girlfriend/wife/whatever. Leng volunteers for a risky mission to a Chinese-run factory, which holds the key to stopping an epidemic, but Big Daddy’s men are also after the same thing, intending to use it to consolidate their boss’s power.

If not quite “Chinese good, American bad,” it’s not far off. Though give me ten minutes with the script and a marker, and I could make it about the heroic struggle of Big Daddy and his rag-tag band of expendables, fighting Communist subversives. For Leng is no official representative: the point is repeatedly driven home that while the Chinese government are very concerned for their citizens, they will not intervene until officially requested, either by the local authorities or the United Nations. In contrast, when Leng’s American sidekick, Dr. Rachel Smith (Jade) asks for help from her embassy, all she gets is a recorded message. At the end, the factions put down their weapons and allow Leng’s refugee convoy to pass, simply because they respect the Chinese flag he has wrapped around his arm (below). The film ends with a literal shot of a passport, and a pledge that the government has its citizens’ backs. 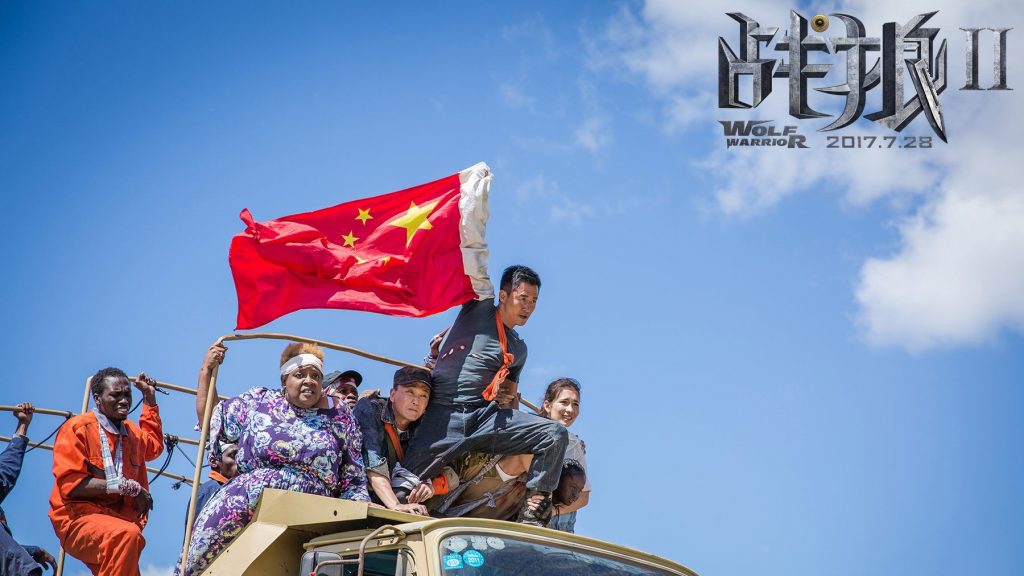 Yeah, the jingoism is palpable, and it’s not exactly progressive in regard to its African characters either. They are largely depicted as helpless, sitting around to be rescued by their yellow saviours – another piece of retro-cinema which feels taken right out of the eighties. But I’ll leave agonizing over cultural stereotypes in action movies to those who wish to do so. As usual, I’m more concerned with other things: specifically, exploding things, hand-to-hand things, things that go flying through the air, or ideally, two more of the preceding in combination (as in the picture, top). The film is not short on them, and despite the highly ambivalent attitude of the story toward the West, Wu is more than happy to lean on both its film-making style and talents.

The makers brought on Sam Hargrave as stunt coordinator – like Grillo, an alumni of Captain America: Civil War, and who also worked on Atomic Blonde – and his style meshes nicely with Wu’s more martial-arts oriented approach. What we found the most impressive sequence has, for reasons I can only describe as vague, a battle between a series of tanks, whizzing around one of those semi-abandoned factories which were almost a required location in the eighties. It feels like an F-sized battle from Robot Wars – I was doing Craig Charles commentary in my head – and is a real blast. You can’t go wrong with tanks, though, can you? Generally, the “I’m so sure” quotient is up there with the works of Tsui Hark, right from the underwater kung-fu battle which opens proceedings.

The whole thing is defiantly macho, and quite deliberately so: Wu flat-out said the purpose of the film was to “inspire men to become real men, and encourage women to go for real men.” Gender equality is notable by its absence: when Rachel tries to stand up to Leng and stay in the war-zone, she is literally picked up and carried over to the rescue chopper. She might as well be spanked and told to go make him a sandwich. At the risk of stating the bleedin’ obvious: if you’re looking for subtlety or shades of grey, look elsewhere. The strokes here are so broad they belong on a billboard, yet as blunt instruments go, it’s briskly entertaining, and well-enough crafted I enjoyed it more than most big-budget Western action films.