For television journalist Katya Nevin (Galliers), life is slowly returning to somewhat normal after her abduction by, and subsequent escape from, a terrorist group on whom she had reported. However, things are about to get a whole lot worse, due to the zombie apocalypse which is just getting under way. The source of this outbreak is a government project; one of the scientists involved has turned whistle-blower, and is trying to pass over to Katya a dossier exposing the program. But a black ops agent, Proteus (Gregory) and his colleagues are just as keen for word not to get out, and may pose a bigger threat to Katya’s life than her colleagues and their new, flesh-eating ways. 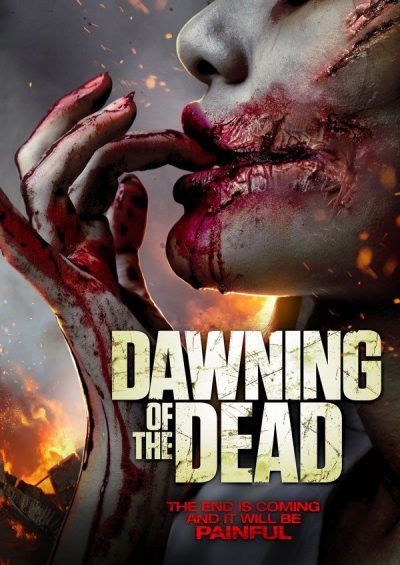 The title alone shows a startling lack of originality. It was renamed from Apocalypse, which is hardly any better, and to be honest, there isn’t too much new here at all. Anyone who has seen more than a handful of zombie films will be able to predict most of what is going to happen, not least because the … sorry, homages don’t stop at the title, with elements obviously lifted from Shaun of the Dead and Peter Jackson’s Braindead. Though I will confess to getting some joy from the latter, replacing the lawnmower as a weapon against the undead, with an industrial floor-polisher.

This will never be mistaken as a big-budget entry in the genre, and there are times where it needlessly shows. For example, the digital exploding car is flat-out terrible, and could easily have been lopped from the script without problem. However, Jopia does have one nice trick, having recruited allies overseas to shoot footage in their locations, then editing this in as news reports to show the global scope of the apocalypse. If occasionally less than subtle – how many shots of Sugarloaf Mountain are required to prove this is genuinely Rio? – it certainly proves a cost-effective way to enhance the atmosphere.

Katya makes for a good heroine, with her backstory injecting an additional element as she struggles to overcome the resulting PTSD. Yet, the experiences of that ordeal also perhaps make her better-prepared than her colleagues, given the savagery necessary to survive under previous circumstances. Unfortunately, the script dilutes things considerably by spending half the time with her boyfriend, Alex (Dayne) and his equally uninteresting sidekick, Christian (Muller). When the apocalypse happened, they were outside the building and so have to make their way back to it. Or something, because I very much tuned out their escapades.

The non-CGI gore is okay: even when limited in style, it tends generally to make up for its shortcomings in sheer volume. However, overall, the movie probably falls far too late in the zombie cycle for this to make much of an impact, especially given its tendency towards ecologically-conscious recycling, shall we say. It’s the first in the genre we’ve watched since we finally gave up on The Walking Dead, and seems closer to a reminder about why we did so, than re-igniting our love.