This is among the most infamous of cult movies, particularly in the UK where the director pulled the film from distribution in 1973, and it remained officially unavailable for more than a quarter of a century, until his death. Italics used advisedly: during the eighties and nineties, it was one of the holy trinity of “banned” films, along with Texas Chainsaw Massacre and The Exorcist. All of them ended up re-entering the public market just before Y2K [Society, somehow, survived…], but copies were freely available on the underground circuit. That subversive circulation only enhanced its aura, as did the film’s alleged role in closing London’s much-loved Scala Cinema – though like much about the film, the legend likely exceeds the reality there. 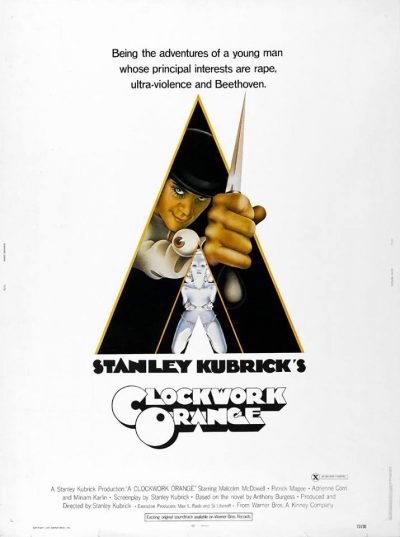 It’s a well-made and thought-provoking piece, yet one I find almost coldly earnest. That’s especially true of the second half, following the capture of Alex (McDowell) by the authorities for murder committed during a home-invasion. To this point, it has been a wild and crazy ride through a futuristic dystopia with our charmingly roguish narrator, whose principal interests are, according to the film’s tagline, “rape, ultra-violence and Beethoven.” Even if I’m still entirely unconvinced films “cause” violent behaviour, this is all depicted in such a seductive and thrilling way, you can see the ripe potential for copy-cats of its style. It generates a neo-futuristic world all its own, from the then avant-garde electro-classical score, through the mix of Russian and slang used by Alex and his crew, to the nightmarish concrete jungle he inhabits.

Then he gets arrested, and it all grinds to a halt. Because Kubrick is now intent on Making An Important Statement, about the importance of free will. It’s better to do wrong, than to have morality imposed on you. Or as the prison chaplain puts it, “Goodness is something to be chosen. When a man cannot choose, he ceases to be a man.” What’s ironic about this theme, is that Kubrick based his film on the American edition of Anthony Burgess’s novel. That omits entirely the final chapter, in which Alex, having been deprogrammed, resolves to abandon his teenage ways and grow up. The movie ends instead with Alex triumphantly, yet much more ambiguously, declaring “I was cured all right!” Sure. Cured of anti-social tendencies, or of morality?

McDowell was aged 27 when shooting started, probably making him among the oldest “schoolboys” in cinema history. Yet it probably helps, in terms of establishing Alex as a cut above the rest of his gang, and there’s no denying the predatory charisma the actor brings to the role. However, its anti-hero is a great deal more interesting when he is driving the film’s narrative, rather than being driven by it, as becomes the case once he is in custody. Alex’s journey through the meat-grinder of the penal system is almost as tedious as the journey to the outer solar system in Kubrick’s 2001. I always forget how dull and apparently pointless it is, and it doesn’t improve on subsequent viewing.

Things liven up with the application of the Ludovico technique, in which he’s strapped down, injected with nausea-inducing chemicals and made to watch real-life ultraviolence, in a crude parody of aversion therapy. It’s perhaps telling that Alex seems less upset by the loss of his free will, than the ancillary loss of the ability to appreciate Beethoven [sidenote: there’s actually more Rossini used than Ludwig Van]. He’s then freed, only to discover that his family has moved on without him, and the complete subjugation of Alex’s aggressive tendencies leaves him utterly unable to defend himself. For it turns out, a scheme like this just doesn’t work, unless everyone has gone through it, or you’re just creating sheep for the remaining wolves.

The film takes a middle-ground: critical of both the left, as personified by Magee’s writer, and the right (Sharp’s minister of the interior), as being interested only in exploiting Alex for their own ends, and not genuinely wanting to help him. But this even-handedness, to some extent, reflects what I find a weakness in the film-maker: he’s reluctant to take a ethical position. I mean, he gave us Lolita, probably the most pedo-friendly film ever to come out of Hollywood. If someone having sex with a little girl leaves you sitting on the moral fence, I’m not sure what to say. There are perhaps faint echoes of it to be heard in the record-shop scene (below), with all its lollipop-licking innuendo: “Enjoying it then, my darling?… A bit cold and pointless isn’t it, my lovely?”

Here, Alex is a murderer and rapist: yet he’s the “victim”? I’m interested in Alex, not sympathetic to him, and the movie never brought me over that particular hurdle. Pauline Kael’s description in her Clockwork Orange review of Kubrick as “a director with an arctic spirit” hits the spot. As I’ve tended to find with most of his films, the strengths are more on the technical side than the dramatic, as he assembles the pieces of the production. From Walter Carlos’s score, through the choreography of the fight scene between gangs, to literally throwing a camera off a roof to provide a first-person perspective of Alex’s suicide attempt, there are a lot of elements here which can be appreciated.

Not least of which include McDowell’s stamina, since he suffered fractured ribs and a scratched cornea during shooting [the man putting eye-drops in Alex’s eyes during the Ludovico technique sequence? That’s a real doctor] For fun, also trying holding your breath during the unbroken single shot when Alex is being water-boarded by his former pals in the horse trough. You won’t make it. Fortunately, Malcolm didn’t have to, since there was an air tube hidden in the water. But when you’re left going “Wow, how did he hold his breath for so long?”, it’s a trick which, if succeeding on some levels, has not quite achieved its intended emotional goals.  Perhaps a bit like the film itself. 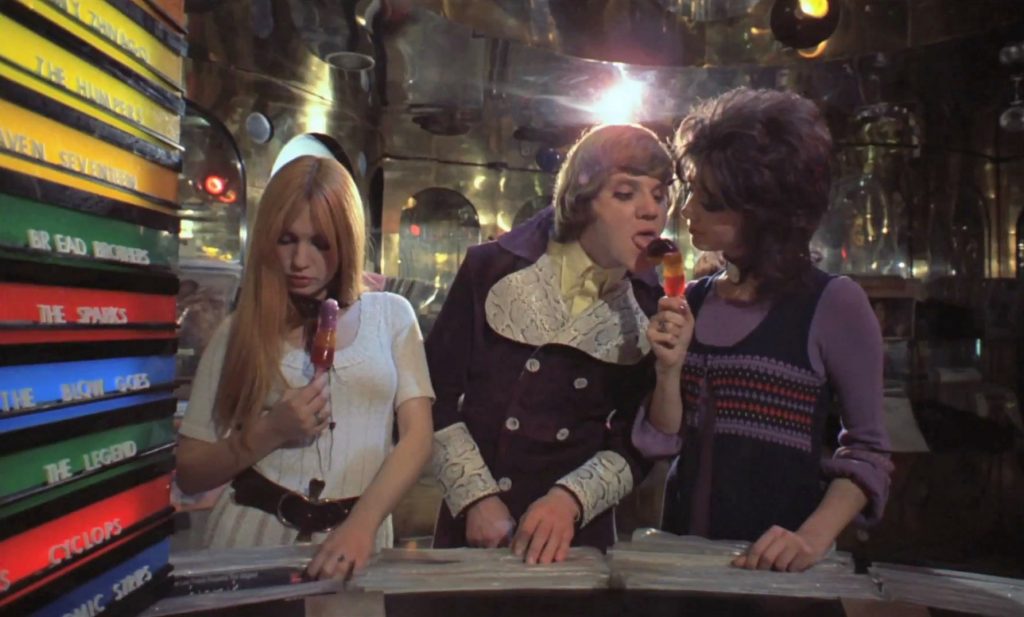 Original review: [4] One story goes this was pulled from circulation by it’s director when the BBFC wanted it cut for a re-release, after passing it first time round. Another says the death threats he received didn’t help things. Whatever. In the 18-odd years while it was ‘unobtainable’ in Britain, it still acquired a huge cult status – witness its high position in the Time Out poll. I’m no great Kubrick fan, but this oozes style and unsettling imagery, especially the opening, which is a nightmare plunge into the ‘hero’ Alex’s ultra-violent world.

Things calm down after he is betrayed by his gang and sent for rehabilitation, with the prison scenes adding little to the film. Kubrick has remained faithful to the novel’s spirit, except at the end where he dropped Burgess’s ending (annoying the author) and there are flashes of genius such as dropping the camera off a roof to capture Alex’s suicide attempt. McDowell captures the character of Alex perfectly – Singing in the Rain will never seem the same again. Real horror-show, in chunks. 7/10