Not quite what it claims to be on the DVD box: “Gut-punching action, gory murders and Matrix-style special effects await you in the ultimate thrill ride.” It’s considerably more solemn than that, though as long as you”re flexible in your requirements, you may find it still has enough to offer. Donny (Ericson) has his sardonic journalist’s life thrown into chaos, after a mysterious red-headed woman, Lova (Röse) shows up. She is being pursued by a man in a suit (Karlsson) – no, really, that’s what he’s called in the credits, “man in suit” – with the apparent McGuffin a small, indestructible cube, that she gives to Donny before vanishing again. Opening the cube will require Donny to uncover some dark incidents from his past, and it turns out, growing up in a small Swedish town, he wasn’t a very nice person. These explain his cynical nature, although the memories have been very deeply buried in his subconscious. 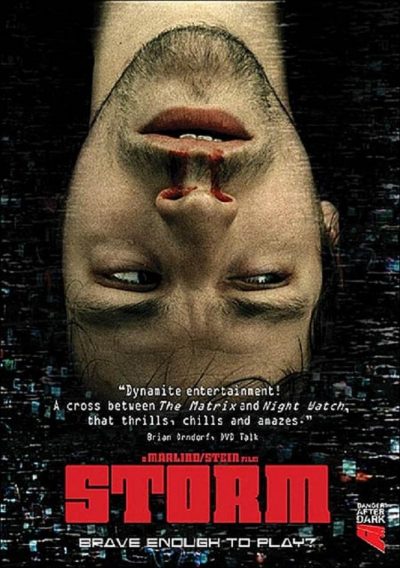 While the film is deliberately vague as to what’s going on, my best guess is that Lova and the man are an angel and a devil respectively, battling for Donny’s soul in the real world, a little like the warring factions in Don’t Tempt Me. He has to decide whether to retain the negativity in his life and keep going as he is; or he can make peace with and amends to those he has wronged in the past, including his then-girlfriend (Becker) and brother, and move on to a happier state. No-one can do this for him, but Lova and the suited man certainly do their best to encourage him to make the choice they want, and that conflict is what lies at the heart of the film.

To be clear, the action is no better than okay, the murders are somewhat bloody, and the effects can only be said to be “Matrix-style” if you’ve forgotten your glasses and are squinting sideways at them under murky lighting conditions. This doesn’t mean it’s without merit, even if it feels sometimes like the makers are guilty of throwing every cool idea they can think of into the mix. For example, the “Storm” comic-book Donny reads, has a scene of Lova cartwheeling her way past an array of light-beam sensors that’s 100% lifted from Aeon Flux. Very slick… but why? It’s the kind of film where I’d like to hear a commentary from the directors, explaining themselves. Maybe I’m just dumb.

Despite this, I still liked the film, since for me, it hit the sweet-spot located vaguely between explaining too much and not enough. I could relate to Donny’s sceptical outlook on life, although my childhood was hardly as traumatic (albeit much of it self-inflicted in the hero’s case here). Even if many elements are taken from other sources e.g. Lova’s Fifth Element inspired style, they are generally mixed well, and some of the incidents from his youth have an unpleasant power which make them hard to watch. Keep an eye out for Joel Kinnaman of the Robocop remake and The Killing, in a very small early role as a barman.